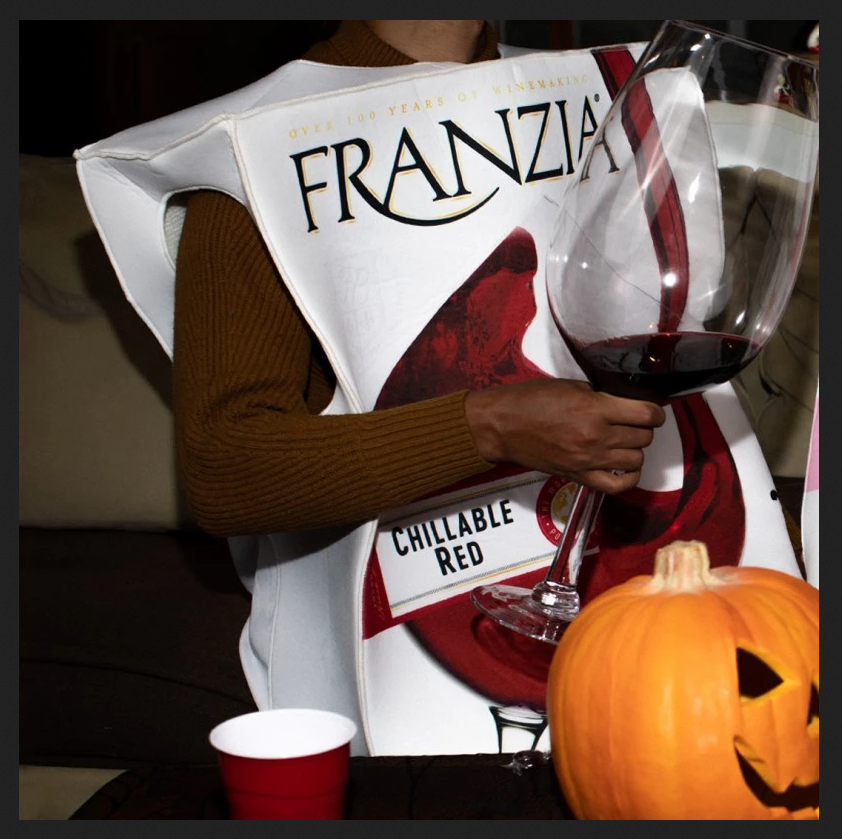 This week’s wine news: Dress up like a box of wine for Halloween. Plus, Eric Asimov on why we can’t afford the world’s great wines and intellectual property rights vs. the First Amendment.

• The right costume? Want to be a box of wine for Halloween? A Detroit radio station reports that Franzia is making that possible. “The Francia boxed wine costume is only $25 and comes in two flavors, Chillable Red and Sunset Blush.” There is also a wine backpack, so you can drink wine while you look like it. No word on how many points the costume gets, though I wouldn’t be surprised if someone, somewhere, gave it a score.

• No great wine for us: The New York Times’ Eric Asimov rants about one of the Wine Curmudgeon’s favorite topics: The ridiculous prices of the world’s great wines. “Among the many ways the rich are different from you and me: Only they can afford grand cru Burgundy. That wasn’t always the case. … For example, back in 1994, a bottle of Comte Georges de Vogüé Musigny 1991, a grand cru, retailed for $80 (the equivalent of $141 in 2020, accounting for inflation). Today, that bottle costs about $800.” The piece is well worth reading, and speaks to a post I’m working on for next week about the absurdity — and even obscenity — of expensive wine prices.

• Nuts to the First Amendment: Because, of course, there’s money involved. The Libation Law Blog reports that “Beer, wine, and liquor trade groups are coming out of the woodwork” to support an appeal by Jack Daniels whiskey against a parody dog toy called Bad Spaniels, which looks like the Daniels bottle. Their support comes despite long entrenched and well-established First Amendment protection for parody, satire, and the like that made it possible for me to write this. Or this. Or this. But in the second decade of the 21st century, getting rich trumps all. Sadly, this is not the first time we’ve seen the wine business throw its weight around, spouting intellectual property. So nuts to you, beer, wine, and liquor trade groups. I’m going to look for one of these for Churro, the blog’s associate editor. Then he can write a post about playing with it.