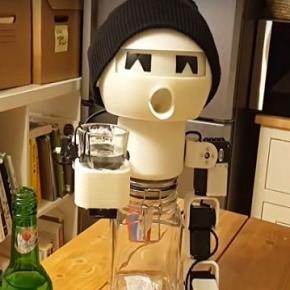 Drinky has a colleague — the robotic bartender at a Prague night club.

This week’s wine news: The Cooper’s Hawk Winery & Restaurants chain has a new investor. Plus, the Italians tell the Aussies to stop using the name Prosecco, and robot bartenders debut

• July 23 update: Ares management is making an investment in Cooper’s Hawk, reports Nation’s Restaurant News, but not necessarily buying it. The best part of the update: The Ares statement, which includes the phrase “disruptive restaurant concept and lifestyle brand.” How 21st century-speak can you get?

• Lots and lots of money: Tim McEnery’s more than unique idea has apparently paid off. His Cooper’s Hawk Winery & Restaurants chain has reportedly been sold, says Nations Restaurant News. The price is $700 million for the 35-location company, paid for by the Ares Management private equity firm. At a time when the restaurant and wine businesses are flat, Cooper’s Hawk recorded an almost 17 percent growth in sales between 2017 and 2018, and its annual per store sales have increased each of the past three years. Those are amazing numbers for a company that is part wine bar, part restaurant, and part wine club, a concept that almost no one but McEnery thought would work.

• A bubbly battle: Australian producers have been making a Prosecco-style sparkling wine for years, and they have called it Prosecco for as long as they have made it. This has infuriated the Italians and the European Union, which have signed trade deals with much of the rest of the world to stop that sort of thing from happening. That’s why we can’t call California sparkling wine Prosecco or Champagne, and why the Europeans can’t call a smoked pork product Virginia ham. In the most recent tussle, the EU wants the Aussies to stop using the word Prosecco as part of a $100 billion trade agreement currently being negotiated. The EU says “prosecco” is a geographical indication for a type of wine produced in northern Italy, rather than a grape variety; the Aussies are having none of it.

• It will never get bored: Prague’s Karlovy Lazne Music Club has installed a robotic bartender to mix cocktails. Customers use touchscreen terminals to order from among 16 mixed drinks. The bartender — two robotic pincher arms, modeled after those used in car factories — stands on a small stage in a corner of the room, below a mass of liquor bottles, and can make 80 drinks an hour. The Reuters report doesn’t mention if the pincher arms can sympathize as customers complain about their spouses, job, or kids.