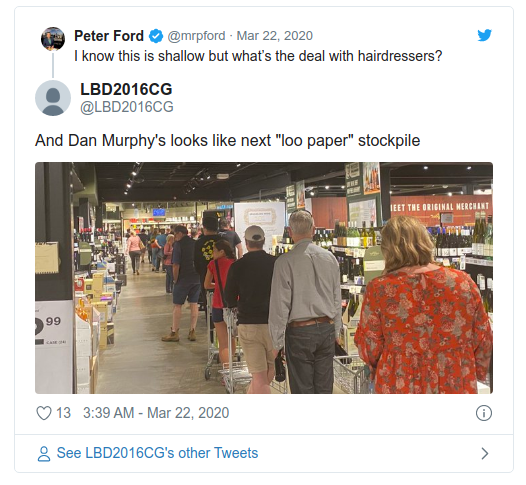 Yes, that’s a line at an Australian liquor store as customers “stock up.”

This week’s wine news: Booze rationing, as only the Australians can do it, plus looking at restaurant closures and that pandemic-fueled spike in wine sales

• How much do you buy otherwise? Australia’s top retailers are rationing booze purchases to prevent hoarding, which seems reasonable given all that is going on. But the limits are mind-boggling: two 24 beer-cases or pre-mixed drinks, 12 bottles of wine, or two bottles of spirits. And you can buy the limit in two of those categories. Even with pandemic-related pub closures, alcohol spending Down Under increased 34 percent in the 52 weeks to March 27. I wonder what the U.S. neo-Prohibitionists would say about that. The Reuters story did note that “one in six adults drinks more than the recommended daily maximum.”

• Restaurant closures: More than one in 10 U.S. restaurants could be closed permanently by the end of the month, says a study from the National Restaurant Association. Restaurant Business reports that three percent have already closed, which translates to 30,000 locations around the country. If 11 percent close, which the study said was possible, that’s another 100,000 empty stores. Nationally, restaurant sales were down 47 percent between March 1 and March 22. “That’s a stunning decline for an industry that operates on a weak foundation of thin margins and excessive debt,” said the story.

• Wine sales up: Some good news – wine sales in the U.S. were up 66 percent March 7 to March 14, far outpacing every other alcoholic beverage as Americans, to quote Nielsen, participated in “consumer pantry-loading time.” That phrase is even worse than social distancing and sheltering in place – shame on you, Nielsen. On-line sales, meanwhile, were up an unprecedented 243 percent. That figure is worth another post; look for it on Friday.