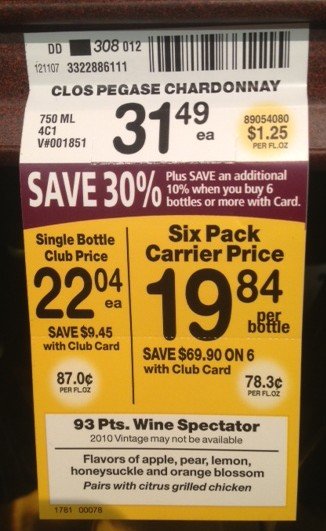 This week’s wine news: Supermarket wine prices vary significantly from state to state, plus a study says liquor stores and high crime are related and the FTC is going after social media influencers

• Supermarket wine prices: A home product review and renovation site says U.S. supermarket wine prices vary significantly by state, with Mississippi and Georgia selling the most expensive bottles. I mention this not because it’s news to anyone who spends any time on the blog, but because it’s always fascinating to see how non-booze sites deal with wine. To its credit, House Method, which did the survey, doesn’t draw any conclusions about why there is such disparity. (Or explain how it bought wine in supermarkets in states without supermarket wine sales.) The results, at the link, are interesting, if nothing else. Who knew red wine was less expensive in Hawaii than in California?

• Less booze, less crime? That’s the approach one study is urging on Baltimore officials as city leaders rewrite its zoning laws, with an eye toward reducing the number of liquor stores and bars in the city. North Carolina researchers used a computer model that took into account homicide rates in Baltimore, as well as previous research that showed one-half of violent crime can be attributed to alcohol access. The result? The study found that cutting the number of alcohol outlets might reduce homicides by as many as 50 a year, as well as generate savings of as much as $60 million annually.

• Watch out, influencers: The Federal Trade Commission, which regulates advertising, will apparently clamp down on all those Instagram and social media influencers. The agency wants to know if consumers understand how influencers work; that is, that they are paid to endorse products and that they must disclose paid endorsements. This will matter in wine, given the increasing role influencers play in pushing products like rose.