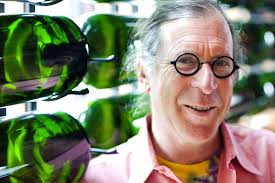 • Boony Doon is sold: Randall Grahm has sold his Boony Doon Vineyard, marking the end of one of the most unique and iconoclastic wine operations in the U.S.  The new owner is WarRoom Ventures, a marketing company that owns California’s Lapis Luna Wines. No sales price was disclosed. Grahm, who pretty much invented the non-traditional wine label and pioneered screwcaps and ingredient labels, will become a partner in the new venture and oversee winemaking. The new Bonny Doon will make just four wines, and not its current 15 — its outstanding rose, a picpoul, and its flagship red and white Rhone blends. Boony Doon, regardless of whether the new company is successful, will be missed. For one thing, I will have less reason to talk to Grahm, who is always a treat, and I won’t be able to buy his standouts syrahs, some of my favorite wines in the world.

• Banging head against wall: The U.S. Fifth Circuit Court of Appeals has refused to re-examine Walmart’s attempt to open liquor stores in Texas. The ruling means the retailer can try to appeal to the Supreme Court or give up on its plan, which seemed quite possible after it won on the district level in 2018. But the Fifth Circuit has twice refused to hear the Walmart suit questioning the constitutionality of a Texas law that prohibits publicly-held companies from getting a retail liquor license. Its reasoning? That Texas law discriminates equally against in-state and out-of-state publicly held companies. Cue the three-tier meme. The only good news from this? If Walmart appeals and the Supremes agree to hear the case, it could be one more chip in the wall of three-tier.

• More of the same: The Wine Curmudgeon banned health news from the blog years ago, since most of it was stupid or foolish or both. So here comes one more story to remind us why the ban is in place: Coffee may help people lost weight. Someone, somewhere, got money to do what appears to be legitimate academic research to discover the same thing that companies that make over the counter diet pills already know. Caffeine is a stimulant. Stimulants are diet aids. Coffee has caffeine. Sigh. And I once had an academic impugn the integrity of this research. Had only I known….