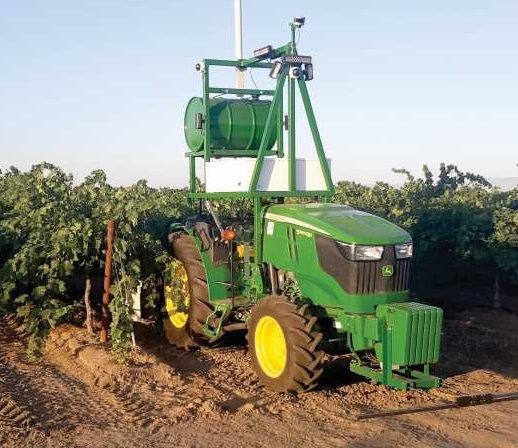 This week’s wine news: The Italian Wine Guy ponders wine writing, plus cannabis sommeliers and driver-less tractors for the vineyard.

• Talking down: Alfonso Cevola on his Italian Wine Guy blog, describes a conversation with a colleague. The latter, describing post-modern wine writing: “I have often been left with a depleted feeling, as if the writer was talking above me, to a more enlightened, more illuminated crowd. What an awful feeling, for a wine writer to make a wine lover feel bad about wine. But it is happening more and more on a regular basis.” This, of course, is something the Wine Curmudgeon has tried not to do; in fact, not talking down to readers has been my reason for being since I started wine writing in those long ago newspaper print days. Hence, Alfonso’s advice: “Pick your influencers with care. Make them count. Forget about how many ‘followers’ or ‘likes’ they have. Use your power of discernment, for those whom you follow will lead, for better or worse. You decide, not Instagram or Twitter. Not the influencer. It’s up to you.And up is where we want to be.”

• How about an MC? That’s master of cannabis to go with Master of Wine and Master of Sommelier. And why not, says a Canadian workplace study looking at employment opportunities in 2030. The CBC reports that the study’s experts “felt it won’t be long before there’s money to be made as an expert on the best varieties of cannabis to consume. Having help to find flavour profiles that suit your personal tastes could make sense as cannabis continues to become more widely available following [Canadian] legalization last year.” Perhaps the best part about the survey? Its authors say there’s not necessarily any data to back it up, but that it’s a “a compelling and playful way to look at how work may evolve.” What a refreshing change of the usual run of studies – wine and health, anyone? – that pass themselves off as legitimate when they may not be.

• No driver needed: They’re called autonomous tractors, and one looks like a post-modern armored personnel carrier. But we know them as driver-less tractors. Kingman Ag Services, which farms about 8,000 acres of wine grapes, pistachios, watermelons, cotton, and other crops in California’s San Joaquin Valley, rolled one out this summer. The tractors can be operated near the land, but also at what the story calls “great distances,” further reducing the need for expensive and hard to find farm labor.