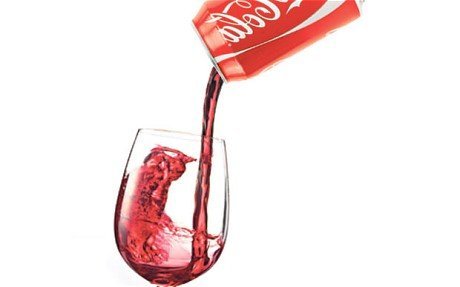 This week’s wine news: Coke and wine – is the soft drinks giant pondering the wine business again? Plus the confusing sizes of canned wine and bias in wine scores

• We’d like to teach the world to sing: The Wine Curmudgeon reports this item with a caveat – there has already been one correction made to the story, and there may be another error in it. Still, it comes from the usually reliable drinks business trade magazine: An Australian newspaper reports that the Aussie Coca-Cola bottler, Coca-Cola Amatil, wants to buy the wine brands owned by Pernod Ricard, the luxury French booze house. Its products include Chivas Regal whisky, Absolut vodka, and Beefeater gin. Pernod’s wine holdings include Jacobs Creek in Australia, Brancott Estate in New Zealand, and California’s Kenwood. Know that this isn’t exactly like Coke’s first foray into wine, which was a disaster (and which the story in the link overlooks). The Atlanta-based company lasted six years in California and New York before selling its holdings. Coca-Cola Amatil is partly owned by Coke, and there is no indication that if it buys Pernod’s wine labels that it will be like Coke actually owning wine again. This is something else the story in the link is unclear about.

• One size doesn’t fit all: Talk to anyone in the wine business about canned wine, and their first complaint is that there are three sizes for canned wine, as opposed to one for beer and soft drinks, and none of which are 12 ounces. Plus, one size can only be sold in a three- or four-pack. That’s the legacy of federal booze law, which regulates package sizes according to alcohol content. U.S. Senator Charles Schumer (D-NY) wants to change that. He’s asking the federal Tax and Trade Bureau that oversees these regulations to streamline the process and make it possible for wine to be sold in 12-ounce cans.

• The inherent bias of wine scores: The Wine Gourd’s David Morrison, who apparently dislikes scores even more than the Wine Curmudgeon does, regularly runs mathematical analyses of wine scores. His current examination, looking at scores form the Wine Advocate and the Wine Spectator : “All three datasets show that variation in wine-quality scores is substantial, and that it arises from several sources. When you combine these sources of variation, it is difficult to attribute any mathematical precision to the use of numbers for wine commentary.” It’s good to know that the math agrees with those of us who see scores as inherently biased, thanks to the flaws that are an integral part of post-modern wine criticism.