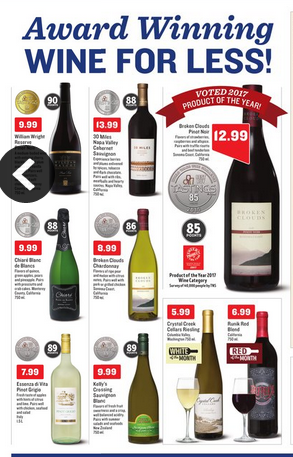 This week’s wine news: We’re going crazy for Aldi and Lidl, plus a high-end wine theft and wine is missing from the country’s political divide

• Discount grocers: A report from a leading consultancy says discounters Aldi and Lidl “are here to stay. People are very happy with this format.” The Bain & Co. study says the two European chains have as much as 30 percent of the market in some parts of the country, an amazing number given how new each are to the U.S. The thing that matters to wine drinkers? That the two chains are investing heavily in high quality private-label products: “They’re not just filling shelves with something cheaper.” That’s what Aldi and Lidl do in Europe with wine, and if we haven’t seen that yet in the U.S., the report is one more reason to hope the chains will upgrade their U.S. wine inventory to its European level.

• No lock can stop them: A Chicago wine collector says the men he rented his condo to stole almost $50,000 worth of wine, including what he called an $8,000 bottle of Napa Valley cabernet sauvignon. The story, from a Chicago TV station, is rife with errors, including the name of the Napa winery. But the story is worth noting several reasons. First, I once lived in the same neighborhood, near Wrigley Field, and there were no condos with $8,000 wine then. Second, because the TV station has a long and proud history, and shouldn’t screw up like that. Third, because the story doesn’t explain why the condo owner was so lax about security for what was termed a “short-term rental.”

• No wine, please: A study outlining the booze preferences for Republicans and Democrats includes lights of light beer and bourbon, but wine is mostly missing from the results. And no, I have no idea what that means. Wine does seem to skew Democratic, save for cabernet and riesling, but the preferences are not nearly as striking as those for bourbon – decidedly GOP – and tequila and vodka, much more Democratic.

One thought on “Winebits 584: Aldi and Lidl, wine theft, wine and politics”