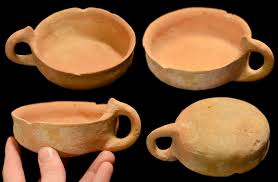 • Corks or scewcaps? The Reuters news service reports that relics from an 1,800-year-old large-scale wine jug factory have been uncovered in Israel. Pottery shards, presumably from flawed and discarded jugs, were found at the site near Gedara, about 30 minutes south of Tel Aviv. The factory was active for around 600 years, making vessels for storing wine that were popular export items, the Israel Antiquities Authority said in statement. “The ongoing manufacturing may point to this having been a family business, handed down from generation to generation.” No word on whether the wine bottled at the site was reviewed by the Roman Winestream Media. I mention this because the time frame for the remains roughly coincides with the Roman occupation of that part of the world, and so much else about this place sounds similar to the way the wine business works today. So why not 88 points from Pliny?

• Forget about it: The Huffington Post, trying to make wine less difficult, offers insight into common wine knowledge that no one really needs to know. The first one? Forget scores. The other four points also make good sense, including the uselessness of vintages for the wine that most of us drink, plus the foolishness of tasting notes “written by a corporation or a publication,” which are “pretty much useless.” It’s good to know I’m not the only one who has figured this out.

• It’s still beer: Americans still prefer beer over wine, according to the latest soundings from Gallup. Beer is at 42 percent, wine is at 34 percent, and spirits are at 19 percent. That’s a bit of bump for wine, which was at 26 percent in 2017. Wine passed beer briefly in 2007. but has been in second place since. My other favorite part of the Gallup drinking surveys? One-third of Americans say they don’t imbibe, a number that has remained stunningly consistent for decades.