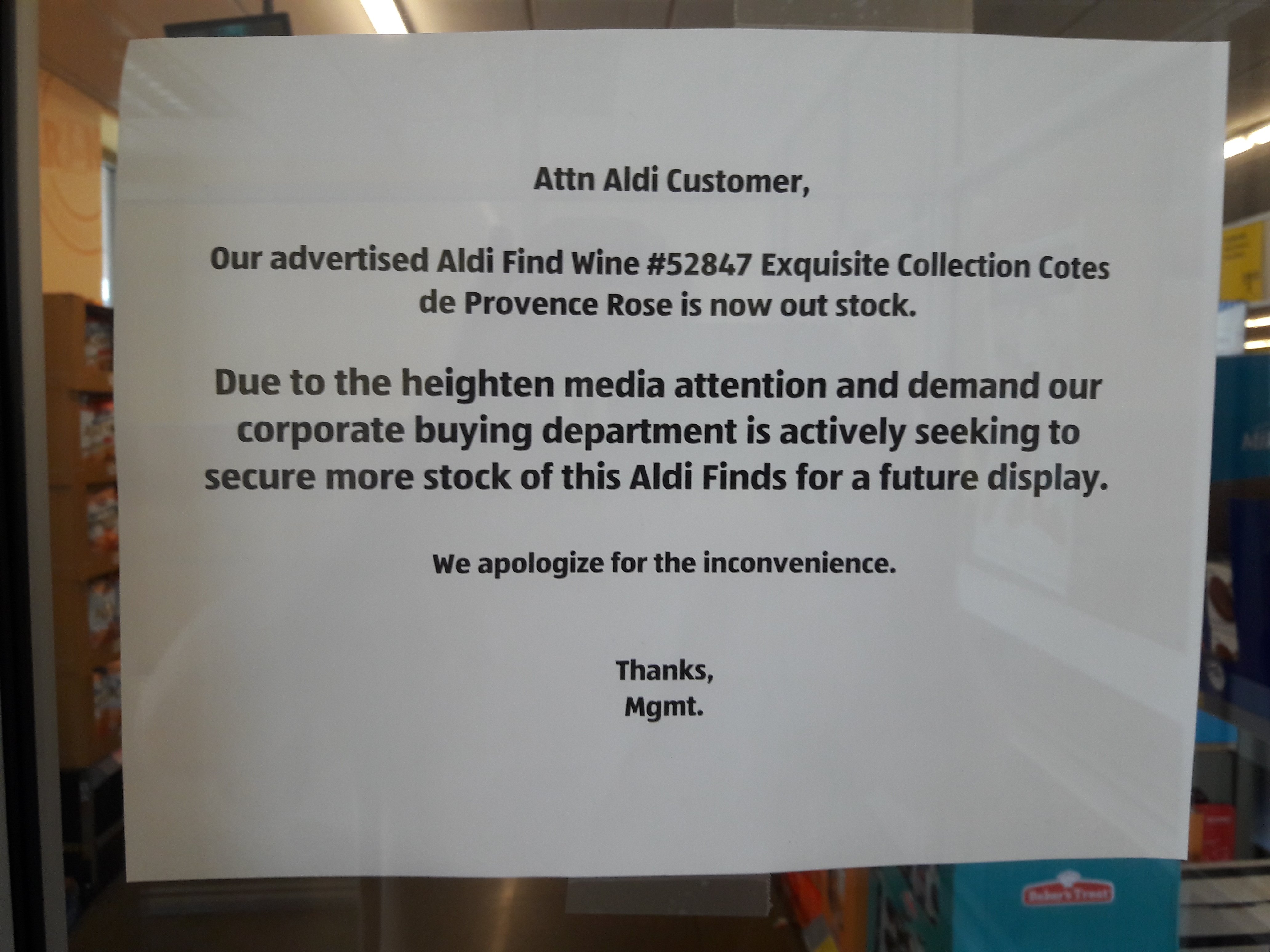 This week’s wine news, because the blog is off tomorrow for the holiday: Media-induced shortages for Aldi wine, plus more three-tier trends

• Cheap rose forever: Imagine the Wine Curmudgeon’s shock when saw this sign (the one at the top of the post) at his local Aldi – a media-induced shortage of rose. As much as I would like to take credit for this, it’s the fault of NBC’s The Today Show, which ran a piece on the $9 Cote des Provence rose at the beginning of June. The clerk at my Aldi said the warehouse has been out of the wine for weeks; hence the sign. What’s most interesting is not that the wine is sold out, because anyone who follows the WC knows cheap pink wine is one of the wine world’s great finds. Rather, that the Provence has been sold in Britain, and that Aldi is bringing it to the U.S. Aldi hasn’t done that with many of the the wines it sells in Europe, instead selling a variety of very ordinary domestic wines in this country. Could it be that the chain is feeling the heat in the U.S. from the debut of its German arch-rival, Lidl? And yes, if and when it ever shows up at my Aldi, I’ll review it.

• Constitutionally protected: The Supreme Court has agreed to decide the constitutionality of a New Jersey law allowing sports betting. Why is this important to wine drinkers? Because the court has never, as far as I know, agreed to decide the constitutionality of the three-tier system that governs the sale, manufacture and distribution of booze in the U.S. But gambling, somehow, gets a hearing? And, if the court sides with New Jersey, it means any state can legalize sports betting – even if they don’t allow you to buy a bottle of wine from Amazon or six-pack of beer on your way to the lake on Sunday morning. If there any constitutional scholars in the audience who can explain why this is not hypocrisy of the highest order, send me an email.

• Only 14 states: Speaking of which, Tom Wark of the National Association of Wine Retailers reminds us that only 14 states allow consumers to purchase wine from out of state retailers. Interestingly, New Jersey is not one of the 14. But if gamblers will soon be able to take the Cowboys and the points in an Atlantic City sports book, perhaps the state will reconsider.