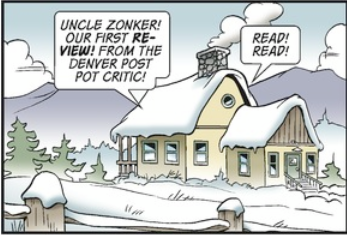 • Just like wine: We’ve written a lot about how legal weed will affect wine, and here is another example: “We think that cannabis has the potential to be more mainstream and be reviewed like wine or beer or other consumables at a really high level with a really discerning and independent perspective.” The New York Times reports that a couple of dozen California newspapers will run pot reviews, including the San Francisco Chronicle – which traditionally has had some of the best wine coverage in the country. Again, anyone who thinks legal dope won’t affect wine consumption isn’t paying attention.

• How dare you? An Indiana convenience store owner, who found a loophole in state law so he could sell cold beer, has been targeted by legislators who want to force him to stop. The complete sad story is here; it’s enough for us to know that Indiana’s elected officials are going to tremendous lengths to preserve a silly, three-tier driven law that gives a cold beer monopoly to package stores and restaurants. Everyone else has to sell warm beer for no other reason than the former has a better lobby than the latter.

• Really old wine: Rekondo, one of Spain’s great restaurants, has a wine cellar with almost 125,000 bottles. But quantity is not all it has – how about a complete vertical of Château d’Yquem, the world’s greatest dessert wine, dating to 1933 or a vertical of Mouton Rothschild, one of the great Bordeauxs, dating from 1945? The article from Punch magazine goes into even more amazing detail, but what struck me was one of the comments to the story: “Amazing wine list AND reasonable prices.” How often do can we say that for restaurant wine in the U.S.?