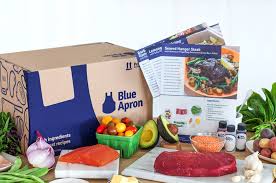 ? The future of wine? Blue Apron, the home food delivery service, has added wine to what it does. This means that when the company sends you the recipe and ingredients for dinner, it will (for an additional charge) send wine to complement the meal. This is revolutionary, and could be the beginning of a change in the way Americans see wine — something several of my wine writing colleagues are hoping for, and have taken me to task for criticizing. Why so? Because Blue Apron sees an opportunity, despite the regulatory hurdles, to sell wine to food people, which has always been one of the sticking points in making wine more mainstream. Food people generally care more about kale — or whatever is au courant — than they do about wine, and if we can get them to see wine as part of the meal, we’ve made huge progress. I know someone using Blue Apron, and will report back after she does it for a while to see if we’re on to something here.

? Wine in arsenic: The wine and arsenic lawsuit has not gone away, reports Wines & Vines magazine, and the plaintiffs have “tweaked [it] to seek billions of dollars in civil penalties, among other damages.” They are using a California state law designed to protect consumers from what the magazine calls noxious substances, and the amended lawsuit days that “just a glass or two of these arsenic-contaminated wines a day over time could result in dangerous arsenic toxicity to the consumer. …” Also worth nothing, and something I haven’t seen before: That most of the wines that the Denver lab tested that were the focus of the lawsuit “suggest that most wines meet the standard for drinking water, and all of the wines fell below 50 parts per billion, as did the beers that were the focus of similar concern in 2013.” Most international standards for arsenic start at 100 parts per billion. Was this, then, as many suspected, nothing more than ambulance chasing?

? Flying the wine skies: Every year, there are rankings of the best airline wine, which somehow don’t include the little bottles that we all know and don’t get excited about. Instead, the rankings are for first- and business-class wine lists on airlines that most of us don’t fly. This year’s rankings feature Singapore and Emirates, which never seem to show up when I have to go to Denver to judge. So read it, marvel at the wines, and then stick your knees up under your chin because the slob in the row in front of you has pushed his seat all the way back, and the last thing you want is wine.