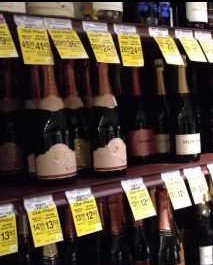 ? More wine: We’re continuing to drink more wine than ever in the U.S., up about 1 million cases in 2014 over the previous year, reports Shanken News Daily. The percentage increase isn’t much, just 0.3 percent. But that there is growth, despite the after-effects of the recession, shows that wine may have finally established itself in this country as something more than a niche product. As the Shanken story notes, “consumption has increased nearly 80 percent over the past two decades,” and per capita consumption has finally risen past its 1970s levels.

? Bring on the sparkling: Cava, the Spanish sparkling wine, has long been a Wine Curmudgeon favorite, but it faces intense competition from Prosecco, the similarly-priced bubbly from Italy. The latter is typically sweeter and fruitier, and the Italians have parlayed that into double-digit growth over the past several years. Freixenet, the biggest Spanish producer and the top imported sparkling in the U.S., saw sales fall four percent last year. Why does that matter? Because exports account for around two-thirds of global Cava sales. Hence concerns that competing with Prosecco on price alone could lead to what happened with Australian shiraz and Argentine malbec — lots of cheap wine of varying quality. I’m not sure that Freixenet’s plan to add more expensive wines to differentiate itself from Prosecco is any better, given that Cava quality is so good at $10 and $15 there is little reason to trade up.

? Bring on the imports: How global has the the U.S. wine consumer become? Imports account for about one-third of the wine we drink, and that figure is expected to increase over the next two decades to as much as 45 percent. In the first half of 2014, though, we drank less imported wine than in the previous year (but the dollar value of the wine we drank increased by five percent). The biggest winner in those six months was New Zealand; the biggest loser was Australia. Sales from Italy and France, the top two exporters to the U.S. were mostly flat, though the dollar amount of what they did sell increased eight and six percent.