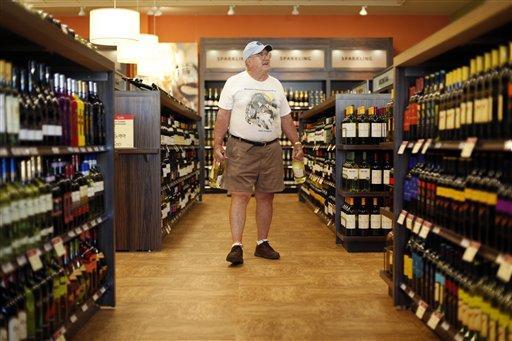 The wine notes that usually appear on Tuesday are posting today because tomorrow is April 1 — and that’s time for the blog’s annual April Fools’ Day post.

? More screwed up than ever: Pennsylvania has been trying to reform its horribly messed up state store system — where the state owns the liquor stores — since as long as I have been writing the blog. Nothing has been done, despite widespread political and consumer support, and the latest proposal shows just how corrupt the system is. Supermarkets would be able to sell wine under the proposed law, but only four bottles per customer per visit. Nevertheless, a spirits trade group immediately denounced the plan, claiming that those four bottles would give the wine business an unfair advantage, since spirit sales would still be limited to state stores. It’s almost impossible to understand what’s going on here, other than to note that this is just another example of the many failings of the three-tier system.

? Britain’s wine pricing: Jamie Goode at the Wine Anorak has an excellent account of the wine pricing controversy in Britain, where most retailers substantially discount wine. And then don’t. And then discount it again. This must seem odd to those of us in the U.S., where discounting is accepted as a normal part of doing business, and where savvy consumers are eager to buy wine when it’s on sale. But British consumer advocates see this as nefarious — “[T]hese fake promotions are bad for wine, and a bad deal for customers, and I won ?t stop talking about them until supermarkets do the right thing and stop them,” writes Goode — and have spent the past couple of years fighting the biggest retailers over the practice.

? You’ve come a long way, baby: Jordan Salcito at The Daily Beast has discovered that women have broken through the glass ceiling and are now important winemakers. I’ll try not to be too cranky about this, but Salcito is about a decade late with this revelation. I wrote the same story for the American Airlines in-flight magazine in 2006, quoting many of the same women she quotes in her story. She also focuses on celebrity women winemakers, and misses the more important change, that Big Wine did most of the glass ceiling work, hiring women where they had never been hired before. Barefoot’s Jennifer Wall is responsible for 13 million cases of wine a year, which may make her the most important woman winemaker in the business. And her boss is Gina Gallo, whose company makes 80 million cases a year. Also, if Salcito doesn’t mind some writing advice, never, ever use a phrase like “pushing the envelope.” I expect more from the Beast.