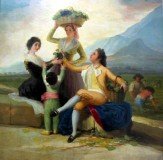 Are there enough grapes to meet the world demand for wine? Watching the world wrestle with this question has turned into fine spectator sport, and these items demonstrate why:

? Pump and dump: This year has seen several reports from banks and consultancies forecasting a dwindling supply of grapes with the implication that wine prices will rise substantially. Lew Perdue at Wine Industry Insight has seen this sort of thing many times, and questions the most recent report: ?The issue is far more complex and requires far more analysis and thought than this shrill, naive and simplistic article presents. ? He goes on to write that reports of impending grape shortages are sometimes used to scare growers into overplanting, and that the people doing the scaring make money out of the result. Hence, pumping and dumping.

? How many French grapes? The Winestream Media has diligently reported what looks to be horrid 2013 harvests in Bordeaux and Burgundy, thanks to very bad weather. That ?s because those are the regions they ?re most concerned with — expensive wine and all that. But in the rest of France, and for the country as a whole, the opposite is true: a harvest exceptionnelle, up 11 percent this year. That increase, compared with a weaker euro against the dollar, should be more than enough to keep prices in line.

? How about those Aussies? Lots and lots of grapes ? so many, in fact, that Big Six producer Treasury Wine Estate is dumping wine that it can ?t sell in the U.S. Nothing illustrates the effect that too much supply has on prices than Yalumba, one of the Wine Curmudgeon ?s favorites. The company dropped its list price from $12 to $10 in the U.S. on its Y series, boosting sales 300 percent in the process. Americans buy wine on price ? and if it ?s quality wine like Yalumba, they ?ll buy more of it.