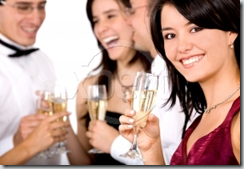 This is the first of a three-part series about wine consumption in the United States. The second part is here; the third part is here.

The good news: Americans are drinking more and different kinds of wine. The bad news? We still drink too much marketing-driven wine, and I can’t decide if the increase in sales of more expensive wines is caused by better educated consumers trading up or wine snobs buying on price.

Overall, though, the results from the 2007 Nielsen Beverage Alcohol Overview are encouraging. We bought $9.2 billion worth of wine in 2007, and wine has increased from 14.1 percent of U.S. alcohol purchases in 1990 to 20.7 percent today.

But it’s not so much that wine sales are up. What’s worth noting is that Americans seem to be understanding this wine thing in a way they haven’t before. That is, we’re buying on quality, value and even how wine goes with food.

Perhaps the best indication of this is the continuing decline in white zinfandel sales. They fell in dollar terms by 10.5 percent, adding to a 0.7 percent slide in 2006. This is not about taking sides in the “Is white zinfandel junk?” argument, since I believe people should drink what they want. Rather, it’s noting that white zinfandel drinkers are apparently trying something else. (As all wine drinkers should.) Consider that riesling was up 23 percent in 2007 and the pinot grigio/pinot gris category was up 13.3 percent.

Another indication of better educated consumers? The growth in sales of wine made with less popular red grapes. Malbec, the Argentine red, was up 59.1 percent. Tempranillo, the Spanish national grape usually favored only by cranky wine writers hollering about value, saw its sales increase 19.9 percent. Petite sirah, even more obscure, was up 12.9 percent. It’s probably not a coincidence that the first two wines are not only food friendly, but pair with a variety of vegetable and chicken dishes in a way cabernet sauvignon, merlot and shiraz don’t. (Sales of the latter were almost flat, though the first two had double-digit growth.

Finally, we’re buying more wine at liquor stores. In terms of dollar value, that’s more than five percent more at liquor stores in 2007 than in 2006. That was almost double the growth from 2005 to 2006. Why is this important?

Because liquor stores usually have a better selection, more informed employees, and require a separate trip. Consumers generally don’t make that separate trip unless they want to take advantage of the selection and employee knowledge, both of which imply better educated consumers. It’s just too easy to buy wine at the grocery store. The latter, incidentally, saw a 7 percent sales jump, but that was more than a point lower than the 2006 increase.

Next time: Livestock wine and new brands, and neither will go away.