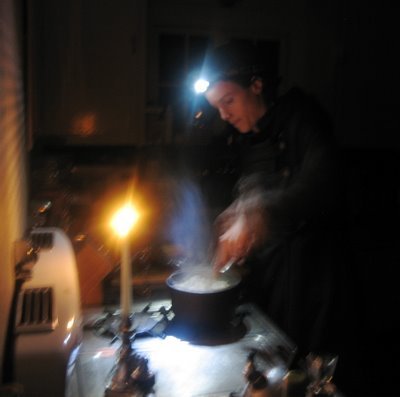 The Wine Curmudgeon has entirely too much experience cooking like this.

Who knew, after last December’s ice storm and four days without power, that the Wine Curmudgeon would get to do it again — and only nine months later? Ain’t electricity deregulation grand, TXU?

We lost power for 2 1/2 days at the beginning of October after 30 minutes of rain and high winds. The difference this time is that temperatures were in the 70s and 80s and not the 20s and 30s. Hence, when it was time to eat dinner, I felt like drinking wine (though I had to use ice cubes for the white instead of leaving it on the kitchen table to chill).

The wine, in fact, was one of the highlights of the blackout (along with the Dallas Public Library, where my branch — despite the outages and years of draconian budget cuts by the shysters who run the city — somehow had electricity and Internet service). Otherwise, the Wine Curmudgeon was even more cranky and irritable than normal; I’m tired of losing electricity the way the rest of the United States gets an annual vacation.

So what did I drink?

• Rene Barbier Mediterranean White NV ($4, purchased, 11.5%): My favorite cheap white wine was a godsend. When the power went off on Thursday afternoon, I screwed open a bottle, dropped in some ice, and tried to convince myself the lights would be back on that evening. The Spanish Barbier is made with the same grapes as cava and has many of the same flavors, though more lemon than apple. Very dry, very crisp, and always a terrific value.

• Cote Mas Blanc Mediterrannee 2012 ($10 for a 1-liter bottle, sample, 12.5%): This French white blend of grenache blanc, vermentino, chardonnay, and sauvignon blanc was almost $10 Hall of Fame quality. It really doesn’t need the chardonnay, which I assume was added to make it softer and more appealing to the mythical U.S. consumer who is supposed to need those things. Having said that, the first two grapes give it freshness and white fruit, and that’s really all it needs. Especially tasty with takeout from Cowboy Chicken, where they did yeoman duty dealing with the outage.

• Cote Mas Rouge Intense Mediterrannee 2012 ($10 for a 1-liter bottle, sample, 13.5%): This red, like the Cote Mas white, comes from Paul Mas, who knows a thing or two about quality cheap wine. Again, my only complaint is that there is merlot and syrah, neither of which does much except make the wine more chalky. Trust me — a red from southern France with grenache, carignan, and cinsault can be delicious without any help, as we have learned with this style of red blend in Texas. But the wine is still enjoyable, with lots of dark fruit and soft tannins.

Know what I was glad I didn’t have drink? The $3 wines I tasted at the end of September. Talk about adding insult to injury.