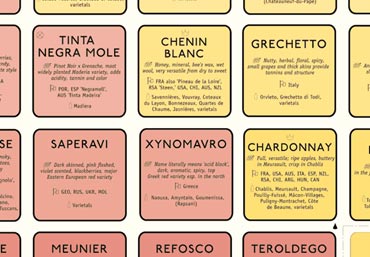 A varietal is the grape used to make the wine ? nothing more complicated than that. Chardonnay is a varietal. So are cabernet sauvignon, merlot, sauvignon blanc and all the rest.

The strong of heart can check out this wine grape glossary, which details hundreds and hundreds and hundreds of varietals. Most varietals used to make wine are European-style grapes, sometimes referred to as vinifera (from the Latin term used to describe the species of grape). Wine in the U.S. is also made from native grapes like the concord and catawba, and hybrid grapes, which are crosses between vinifera and native grapes. It ?s easier to make quality wine from vinifera, which is why it ?s used most of the time.

After the jump, more about the term varietal:

Often, people will ask: ?Is that a varietal wine or a blend In this case, the meaning is much the same. A varietal wine is one made with mostly one kind of grape, while a blend contains several kinds of grapes. By law in the U.S., a varietal wine has to be made with at least 75 percent of one grape. Otherwise, it must be labeled as a blend. That means that if a wine says chardonnay on the label, it contains at least 75 percent chardonnay in it. Though, in the U.S., most varietal wines far exceed that minimum. (There also also minimum laws in some states and other wine producing countries.)

In addition, people will ask: ?What are the varietals in this blend They ?re asking which grapes were used to make the blend.

Why does winespeak use varietal instead of grape? Because it ?s winespeak, where the goal is to be as complicated as possible. Also, if you can throw around jargon, it makes you sound like you know what you ?re talking about, as well as making you sound more important than the next person.

Much of the wine terminology in this country was handed down to us from the professionals, and that ?s the language that they use. This is neither good nor bad; learning it is part of the educational process, and it ?s the job of people like the Wine Curmudgeon to make learning as easy as possible. The difficulty comes with wine writers and educators who don ?t do a good enough job of explaining the terms or confuse the issue by inventing even more complicated ones.