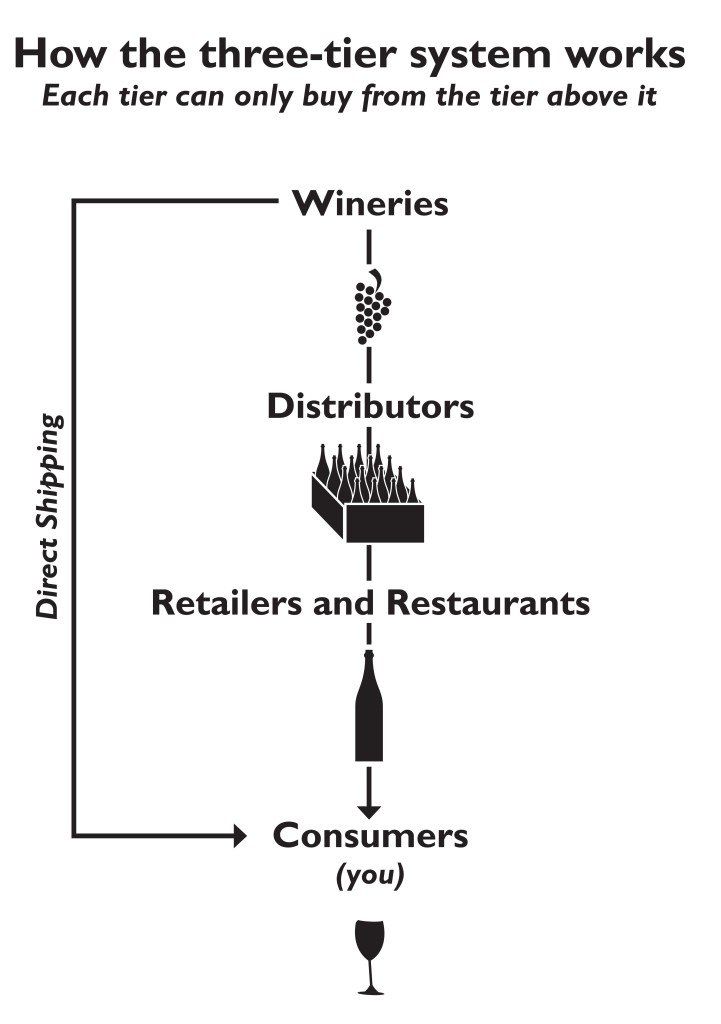 Believe it or not, in almost seven years and more than 1,700 blog posts, I ?ve never written a post explaining the three-tier system. There are lots of posts about three-tier and even some explanation, and I ?ve written about it for others. But nothing here.

So what you need to know about the three-tier system, which regulates how everyone in the U.S. buys wine, beer, and spirits:

Prohibition, the 18th Amendment to the U.S. Constitution in 1920, outlawed the sale, manufacture, and transportation of alcohol in the U.S. until it was repealed 13 years later by the 21st Amendment. Repeal gave us the three-tier system, so named because it has three parts: The first tier are the producers, the wineries, breweries, and distilleries. They can only sell their product to a distributor, the second tier. Only the distributor can sell to retailers and restaurants, which are the third tier. Save for limited exceptions, like direct shipping, and which total less than 10 percent of all wine sales, the consumer can only buy wine from the retailer or restaurant.

This makes wine different from almost every other consumer good in the world. If you want to buy a computer from Dell or shoes from Nike, each is only a couple of mouse clicks away from the manufacturer’s website. And Amazon has become a $61 billion company by serving as the ultimate retailer, crossing state lines to sell its customers everything from books to underwear.

But ordering wine from an out-of-state producer is a crime in much of the U.S., and it’s a crime in every state to order wine from an out-of-state retailer. On-line retailers like Wine.com, which is in 42 states, have to legally qualify as an in-state retailer (by setting up an office or a warehouse, for example) to be allowed to do business in those states. And even Amazon, with its new Wine Marketplace, has to abide by these rules. Technically, it doesn ?t sell wine, but serves as a conduit to retailers and producers that are legally allowed to sell it.

How did we get to this point? Why is alcohol different from running shoes? Because the political compromise that ended Prohibition allowed each state to regulate alcohol in its own way. Three things are important about this:

? Every state ended up using some form of the three-tier system, and every state has modified the three-tier system to what it thinks works best for it. Which means there are 50 laws for 50 states, and sometimes different laws within states. Pennsylvanians can only buy wine from retailers owned and operated by the commonwealth. New Yorkers can’t buy wine in grocery stores. Montgomery County, Md., residents can’t buy wine at retailers like Cost Plus World Market, but residents of adjacent Prince George’s County can.

? Three-tier was designed to keep organized crime out of the booze business, which is understandable given the role organized crime played in bootlegging during Prohibition. Every liquor law attorney I have ever talked to says that ?s an important reason why three-tier has endured. State attorneys general and state liquor control boards, given three-tier ?s success in keeping the mob out of booze, don ?t see any reason get rid of it.

? The distributors, and especially those that deal in beer and spirits, don ?t want three-tier to change, and spend millions and millions of dollars annually lobbying state and federal legislators to preserve the system. This is understandable, too, given that the end of three-tier would mean the end of distribution as they know it. Their allies, surprisingly, are often independent retailers, who don ?t want their chain competitors to be able to buy wine directly from the winery, since that would give the bigger companies better pricing.

The worst part about thee-tier? We ?re stuck with it. A variety of federal court decisions, including Siesta Market in 2010, have said that three-tier is constitutionally protected, just like freedom of speech and freedom of religion. The 21st Amendment, say the various rulings, shelters three-tier from court challenges and state and federal legislation to alter it.

Yet none of this means three-tier is relevant in the 21st century. Prohibition ended 80 years ago, and organized crime has moved on. It ?s difficult to believe that rum running would be as profitable as today ?s pastimes, like credit card and bank fraud. In addition, we ?ve made tremendous strides in combatting alcoholism and drunk driving in the U.S., and these abuses are always given as a reason for three-tier.

For wine drinkers, three-tier limits consumer choice. Do you live in Illinois and had a wine you liked at dinner in Wisconsin? Did you try to buy that wine in Illinois only to find that it isn’t available? That’s the fault of three-tier. Just because a distributor in Wisconsin carries the wine is no guarantee that a distributor in Illinois will carry it. The Illinois distributor may not like the wine or the person who makes it or how much it costs. So they decide not to carry it, and you can’t buy it ? even though it’s available in another state just a half-hour drive away.

This is an especially acute problem for cheap wine. Distributors, all things being equal, prefer to deal with the biggest producers. They can get better pricing, the supply chain is more efficient, there is money for marketing, and they’ll have more wine to sell since big producers deal in tens of thousands of cases.

But much cheap wine ? perhaps the most interesting cheap wine ? is made by smaller companies that don’t produce tens of thousands of cases, can’t offer the best prices, have less efficient delivery systems, and whose wines are more quirky. So they have more difficulty finding a distributor ? and often can’t.

I ?m resigned to three-tier, given the court rulings. But that doesn ?t mean I have to be happy about it.