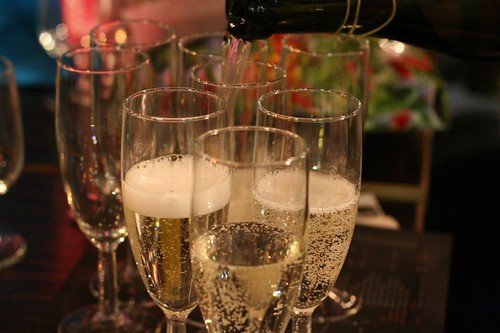 Wine terms are confusing enough on their own, but the terms for champagne and sparkling wine offer their own style of confusion. For one thing, thanks to a trade agreement between the United States and the European Union, only sparkling wine that is made in the Champagne region of France can be called Champagne.

But that’s only the beginning. This glossary of champagne and sparkling wine terms — in honor of my old pal Darryl Beeson, who always enjoyed a fine glass of the bubbles — will answer most questions.

The good news about these terms is that they extend across the entire sparkling wine spectrum, regardless of where the wine is made. And bubbly is made throughout the world, though many people still tend to think that the best is from Champagne. (The Wine Curmudgeon loves Champagne, though he doesn’t love the prices.)

As noted, only wine made in the Champagne region of France can be called Champagne, even if it’s made elsewhere in France — and bubbly is made almost everywhere in France. Some French sparklers, like those from Burgundy, Alsace or the Loire, are called cremant, so don’t be intimidated if you see that word on the label.

Sparkling wine made in Spain is called cava, and in Italy it’s usually called Prosecco or Asti. In the U.S. and most of the rest of the New World, you’ll see sparkling wine on the label, save for some older brands like Korbel. They were grandfathered in as part of the U.S.-E.U. trade agreement.

These are the terms common to sparkling wine throughout the world:

• Methode champenoise or Methode traditionelle: The wine was made in the Champagne style, where the second fermentation takes place in the bottle. All wine, including bubbly, is fermented, which is when the sugar in the grape juice is converted to alcohol. The second fermentation, which still wine doesn’t have, produces the bubbles. Wines made this way will have one of these terms listed on the label. Most of the world’s great Champagnes and sparkling wines are made this way.

• Charmat: This is the other primary production technique, in which the second fermentation takes place in a steel tank. It’s typically used for Italian and lower-priced American sparkling wines. The term usually doesn’t appear on the label (though that is changing). Charmat produces sweeter wines with less bubbles, though it can produce its share of quality wines, especially from Italy.

• Vintage: One trend among high-priced sparklers is to produce vintage wines, made with grapes that were all harvested in the same year. But the majority of sparkling wine doesn’t have a vintage, and most of the time the vintage isn’t especially important. NV on the label stands for non-vintage — that is, the grapes used to make the wine come from several years instead of just one. It’s a common practice to ensure quality and consistency. This is a carryover from the Champagne region, where the weather is such that it’s not always easy to grow quality grapes.

• Brut: Brut means the wine is dry, in the same way that still wines are dry. It’s a French term that the industry has adopted. One caveat about brut: One producer’s definition is not necessarily the same as another, and the same holds true across regions. Some wines labeled as brut, like Italian, aren’t as dry as other brut wines, like those from France or Spain.

• Extra dry: The wine is sweeter than brut. No, it doesn’t make any sense, but that’s the term.

• Sec, demi-sec, and doux: These wines are sweeter than extra dry, with doux the sweetest. Generally, we don’t see many of these wines in the U.S.

Photo: “Champagne from Anna” by Ali Elan is licensed under CC BY-NC-SA 2.0

One thought on “Wine terms: Champagne and sparkling wine”