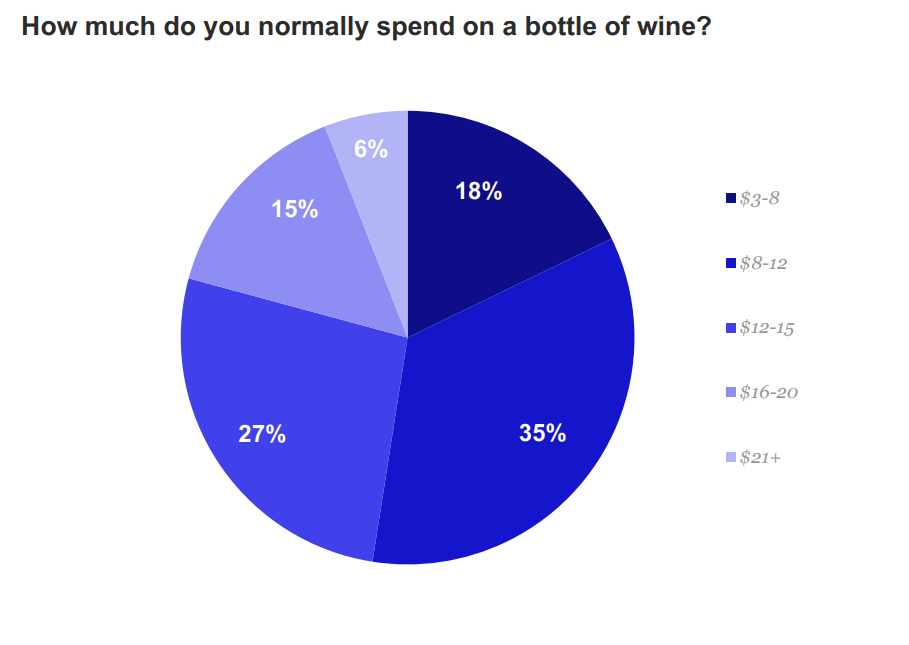 Most of us spend less than $15 a bottle, which isn’t that much different from what we’ve been paying for the past 30 years

What do wine drinkers pay for wine? Not what the wine business wants us to pay:

• Only six percent of us spend more than $21 a bottle.

That’s the stunning summary from a 2018 study by Morning Consult (via Wine Industry Insight). Why stunning? Because the wine business has been feeding us premiumization – the idea that more of us are going to spend more money for a bottle of wine for no particular reason – since the end of the recession. Since then, it seems like every wine study, consultant, and industry wise guy has been insisting that premiumization is the future of the wine business. To listen to them, we’ll soon spend $20 a bottle and be grateful for the opportunity.

Which this chart says isn’t true (click on it for a bigger version). Its numbers aren’t that much different from the last significant pricing study, conducted in 2014 by the Wine Market Council. In that report, the council identified $20 as the cutoff for expensive wine in the U.S. and found that just five percent of us ever buy wine costing more than $20.

In other words, I haven’t been wasting my time for the past decade.

So why they hype and blather over premiumization? Because the wine business thrives on hype and blather. Yes, there have been changes in what we’ll pay for wine, with more wine being sold between $10 and $15 since the end of the recession and sales of wine costing less than $5 decreasing during that period.

But I’m convinced this is more about demographics, as older wine drinkers – who bought the least expensive wines – drink less and younger wine drinkers enter the market at $8 and $10 instead of $5 and $8.

And that’s more or less what this chart demonstrates.