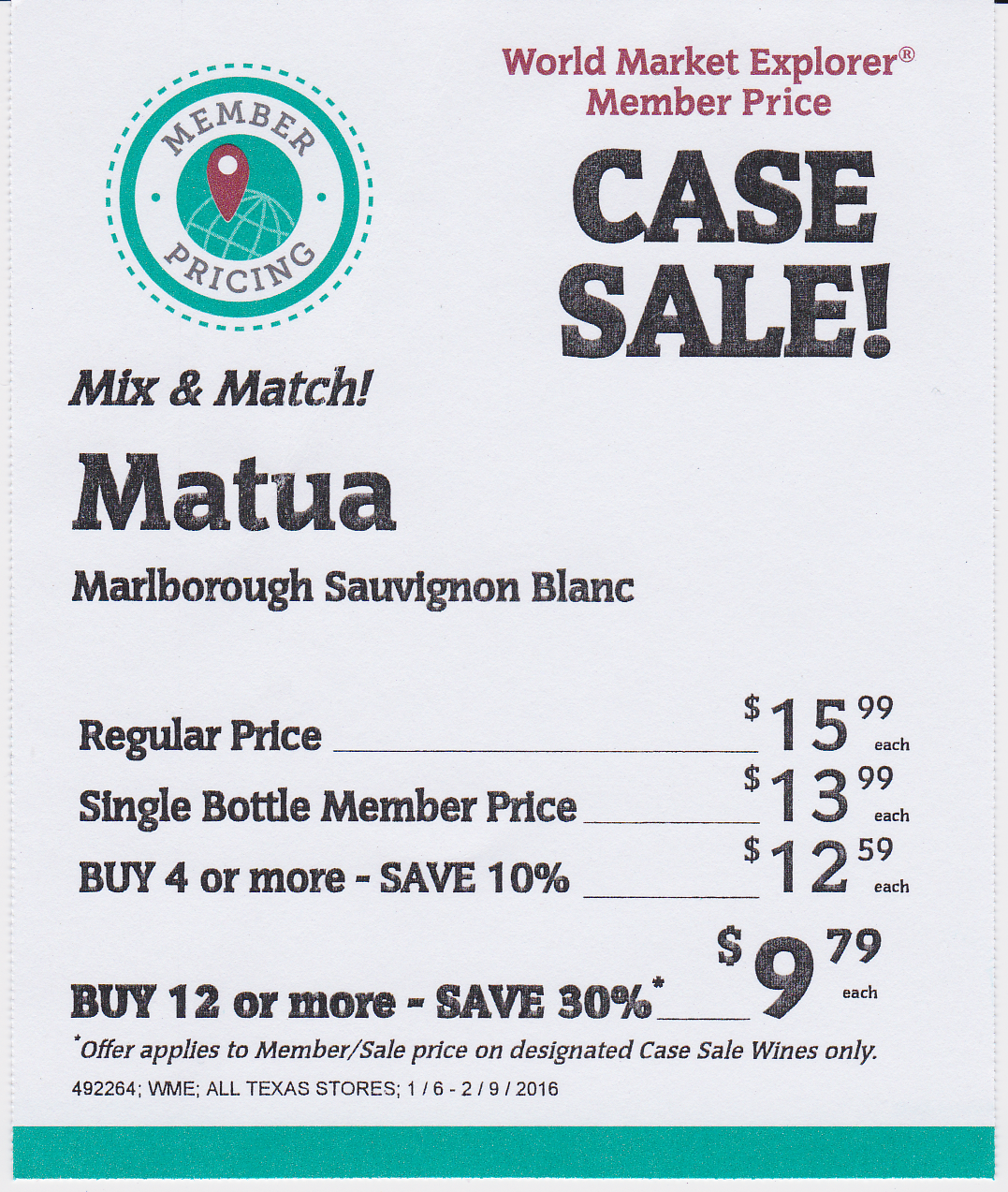 Wine prices in 2016 won’t necessarily be higher or lower; instead, they’ll be more confusing. That’s because more retailers will move to tier pricing, where each wine has two or three or even four prices, making it that much more difficult for consumers to figure out what’s going on.

This approach, which grocery stores have used successfully for the past five or six years, features a combination of sale prices, club prices, and quantity discounts, and it will become more common for a couple of reasons. First, the big chains like it — for example, BevMo, with 155 stores on the West Coast and in Arizona, offers a regular price; a cheaper, club price; and sales prices. Spec’s, with 160 stores in Texas, has cash, credit, club discounts, and sales prices. And World Market, once a bastion of fairly priced cheap wine, now has so many prices — as the photo shows — I’ve stopped shopping there. The Matua, for example, is $10 or $11 elsewhere for one bottle.


Second, it makes price comparison that much more difficult, and retailers don’t like price comparisons. Showrooming, where shoppers check prices on-line before they go into a store, makes retailers crazy. But if you’re not sure what the price in the store really is, showrooming becomes less effective. Third, tier pricing makes it seem like the product is cheaper than it is. If a bottle of wine is $12.99 list, $10.99 with your club card, and $8.99 if you buy six bottles, you’re more likely to focus on the $8.99 price, even though most of us will never buy six bottles at one time.

Fourth, no one is sure where prices will go in 2016, and tier pricing allows retailers to hedge their bets. Christian Miller of Full Glass Research in Portland, who studies wine pricing, says he expects prices to be flat between $8 and $15 even if some retailers want to raise them. That’s because the biggest distributors and retailers will keep suppliers and producers from raising prices, since the former can still make money on the smaller margins — and higher sales — that come with lower prices.

There is also evidence, says John Gillespie of the Wine Opinions research group, that the $10 to $15 range is still the most attractive price for wine drinkers, regardless of all the talk about premiumization. If that’s the case, then retailers will want to keep prices steady.

In addition, there are a couple of wild cards for wine prices in 2016:

• Several retailers I talked to, including one of the biggest in the country, said price resistance seems to be holding at $25 and up, and some high-end producers who raised prices last year were discounting their wines at the end of 2015 to get rid of excess inventory.

• Will the strong dollar, which should make imported wine cheaper, do that, or will importers and distributors keep the difference for themselves? If they do, then retailers will have more leeway on pricing for domestic wine.

• The California drought, which cut yields for some varietals in some areas in 2015. No one is quite sure what this means to pricing, either this year or next. If higher prices for grapes, thanks to the drought, force wine prices up, will consumers trade down instead of paying more?