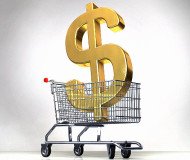 You don’t need to be an expert — or to consult an expert — to figure out what wine prices will do in 2014. Just spend a couple of extra minutes at the grocery or liquor store the next time you’re there. If you see a fair number of previous vintage wines, and you almost certainly will, then you’ll know that wine prices in 2014 aren’t going anywhere.

Which is mostly what the experts are saying, though their methodology is a little more sophisticated. The man who probably knows more about this than anyone else, Rob McMillan at Silicon Valley Bank, wrote in the bank’s 2014 wine business report: “There are broad expectations in the wine business that bottle price increases can be taken in 2014. Due to the higher volume of wine available for sale in a slow economy, we don ?t believe the opportunity is there to take broad increases with the exception of selective increases in the higher priced luxury segment.”

But he’s not the only one who sees 2014 as more of the same — which is terrific news for consumers. One key survey’s finding: “Domestic sales in the $10 ?$20 retail price category are booming, primarily for leading varietals such as cabernet sauvignon and pinot noir. However, the under $10 segment still commands roughly 80 percent of total sales among major varietals.”

The reasons for stable prices are many, including increased supply, not just in California but — and regardless of the harbingers of doom — around the world. Some of it is the U.S economy, which continues to take one step forward, one step sideways, one step backward, and then sit down for a bit, all of which tempers demand (as all those previous vintages on the shelf demonstrate). But there are a host of other reasons, each of which should continue to hold down prices — not just this year, but for the foreseeable future:

? Increased competition among producers, which always keeps price in check. Or, as Vintank’s Paul Mabry said during last week’s webinar to discuss the 2014 report: “This is the most competitive wine market in human history.” Never have U.S. consumers had so many choices; if one wine is too expensive, then there is almost certainly another wine of similar quality from somewhere else in the world for that costs less.

? Long-term declining demand in Europe. There are many reasons for this — the euro crisis, which shows no sign of ending and has dampened demand, as well as changing lifestyles. Yes, the French and Italians still drink more wine per capita than anyone in the world, but they drink less than they used to. The catch is that their wine industries are still more or less set up to supply enough wine for the old days, which means they have more wine than they need.

? Better supply chains, which means it’s cheaper, easier, and more efficient to get all that extra wine from other parts of the world, whether Europe or Australia, to U.S. retailers.That’s one reason why a bottle of Yellow Tail shiraz is about the same price in Australia as in the U.S.

? Improved grape growing technology, which means producers worry not about how many acres of vines are planted, but about how many tons they can get per acre. In addition, the old rule that too many tons per acre meant poor quality grapes is becoming less true. This is revolutionary, something never seen before in the 500-year history of the modern wine business. I touched on this in the cheap wine book, but its ramifications are only now becoming clear — we’re getting more grapes of higher quality without planting more vines.