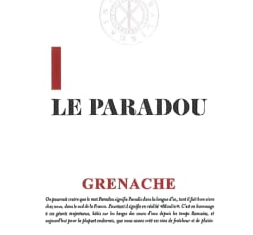 The Le Paradou Grenache displays quality and balance for $11

Grenache is the Wine Curmudgeon’s kind of grape. It can make great cheap wine, but it’s not always easy to work with and it isn’t especially popular as a varietal wine.

So how excited was I to see the Le Paradou Grenache ($11, purchased, 13.5%) on a virtual store shelf? Quite excited, as you can imagine. And the Le Paradou didn’t let me down.

This French red is labeled Vin de France, which means it’s not part of the appellation system. These wines are notoriously uneven in quality, but this one offers value for money. Most importantly, it doesn’t suffer from grenache’s flaws – too jammy, almost sweet, too ripe, and practically cloying.

Instead, the Le Paradou is surprisingly balanced – not so jammy, but dark; berry fruit that is almost not ripe; a little spice or black pepper, something missing from all those overworked grenaches; and even a tannin or two hiding in the back. How often does that happen in grenache?

In other words, simple but not stupid, and the kind of cheap wine we need more than ever.

One thought on “Wine of the week: Le Paradou Grenache 2017”