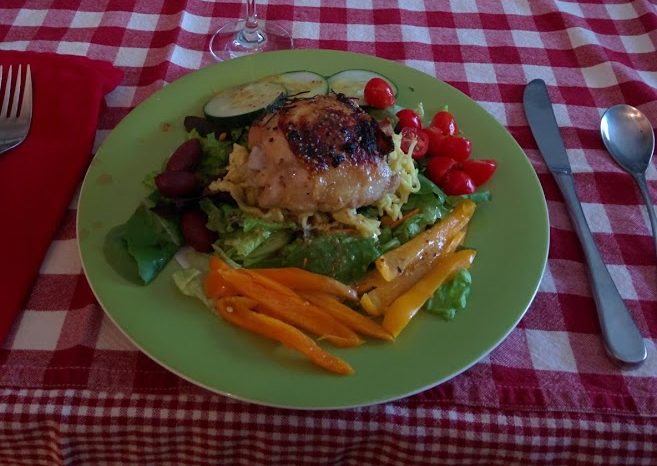 The Wine Curmudgeon pairs wine with some of his favorite recipes in this new, occasional feature. This edition: three wines with a roast chicken salad with Chinese noodles

Technically, this isn’t chicken salad, not the kind that Americans know all too well – leftover, dried out chicken glopped with too much mayonnaise. Rather, it’s a way to take ingredients as simple as chicken thighs and lettuce and turn it into a dinner more interesting and more fun to eat during the week – yet still easy to do.

This dish has its roots in late 1980s nouvelle cuisine, where the goal was to pile as little food as possible as high on the plate as possible while charging as much money as possible. So, given my sense of humor, why not do the same sort of thing, but that was cheap and enjoyable? In other words, make a simple green salad, top it with the Chinese noodles, and then top the noodles with the roasted chicken thighs. Drizzle with vinaigrette (made from the chicken fat and liquids from roasting, even), and you have one dinner, one plate, and minimal cleanup.

There are two keys here: marinating the chicken thighs in lemon juice, garlic, olive oil, and fresh rosemary; and using the odd Chinese noodles that are dyed yellow. You can substitute rice noodles or even ordinary thin egg noodles, but the Chinese version seems to work the best. Click here to download or print a PDF of the recipe.

Pairing wine with this is not nearly as complicated as it may seem:

• GrooVee Grüner Veltliner 2012 ($10, purchased, 12%): Gruner is an Austrian grape that has been touted by the hipsters and the sommeliers as the next big thing for a decade. This is a Hungarian version that turns most Austrian gruners on their heads, despite its age and silly name. Look for a petrol aroma and peach and lime fruit. Imported by Quintessential. Highly recommended.

• Zestos Garnacha Old Vines 2015 ($10, purchased, 13%): This Spanish red is a little heavier and more Parker-like this year, but still well worth drinking and neither hot nor too flabby. Lots of red cherry fruit, almost candied, but backed with a peppery finish. Imported by Ole Imports

• Arrumaco Rose 2016 ($8, purchased, 11.5%): This Spanish wine is pink. You’re having chicken. What else needs to be said? Look for lots of almost sweet strawberry fruit, though the wine is bone dry. Imported by Handpicked Selections