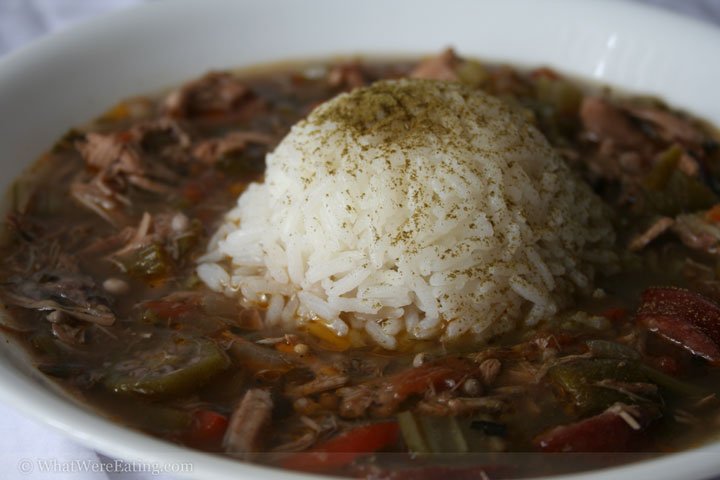 The Wine Curmudgeon pairs wine with some of his favorite recipes in this new feature. This edition: three wines with a traditional Cajun-style gumbo.

Cajun food has long been considered difficult to pair with wine, since it’s too spicy and many of the ingredients aren’t wine friendly. This, like much Winestream Media advice, is silly and outdated.

This gumbo is based on those I first tasted a long time ago in a galaxy far, far away – when I was the sports editor of the Daily Courier newspaper in Houma, La., about 60 miles southwest of New Orleans. Back then, the only thing I knew about wine was that other people drank it.

Gumbo, like barbecue, is contentious, and there are as many different ways to make it as there are families in south Louisiana. The most bitter debate is about whether tomatoes should be included; most Cajun-influenced recipes don’t use them, and I agree. They make the gumbo too much like tomato soup. On the other hand, John Besh, who knows a thing or two about gumbo, adds tomatoes.

Okra can also be controversial, but I can’t imagine gumbo without it. The rest of the recipe is quite traditional – a roux; the onion, celery, and bell pepper seasoning base; and lots of cooked chicken and smoked sausage. Real andouille is best, but any quality grocery store sausage will do. Click here to download or print a PDF of the recipe.

Pairing wine with this is easier than it seems. The gumbo has an earthy, salty, and slightly spicy flavor, so consider these three styles of wine:

• Chateau Bonnet Rose 2016 ($12, purchased, 13%): This French pink from one of the world’s great cheap wine producers has enough fruit for the gumbo’s spice, with sweet cherries and strawberries, as well as an almost limestone minerality. Highly recommended. Imported by Deutsch Family.

• Nik. Weis Urban Riesling 2016 ($15, sample, 10%): This German white is more international in style, so it’s a little sweeter with less citrus and without the petrol aroma of more traditional German rieslings. The sweetness, though, makes it spot on with the gumbo. Imported by HB Wine Merchants

• Flaco Tempranillo 2015 ($10, purchased, 13.5%): This Spanish red is light enough so it doesn’t overpower the gumbo with big tannins or high alcohol. It has soft cherry fruit and green herb flavors, which fit the dish nicely. Imported by Ole Imports