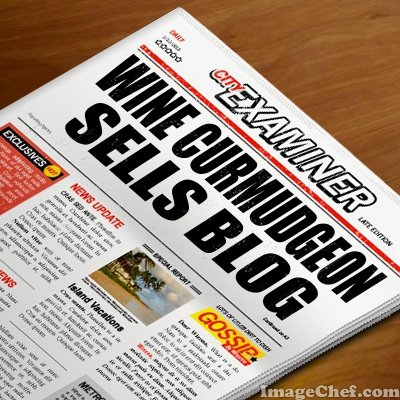 “Bring on the scores – 90 points for everyone!”

Jeff Siegel, the Wine Curmudgeon, who has spent the past decade extolling the virtues of cheap wine while skewering wine’s foolishness and snobbery, has had enough. He will sell the blog to the Wine Spectator on April 1; on that date, it will immediately begin using scores, running tasting notes no one can understand, writing about wine that isn’t available to buy, and being as arrogant as possible.

“What’s the point in doing what I’ve been doing?” said Siegel. “No one cares, either among consumers or producers. They just want to drink what the Spectator tells them to drink, and they want to pay two or three times what the wine is worth because it’s in the Spectator. I want to get in on that gravy train.”

A Spectator spokeswoman, who declined to be identified because she was too embarrassed to be quoted in a story about Siegel, said the magazine bought the blog because it was tired of being the butt of so many of its jokes. That included the special Curmudgie award it received every December as well as the blog’s annual April 1 post.

“On the one hand, it’s not like anyone cares about what Siegel writes,” she said. “Who really wants to drink cheap wine? And the few people who read him aren’t really good enough to read our magazine anyway. But some of the old white guys here figured we should shut him up before he causes any trouble.”

Financial terms were not disclosed, but a source close to Siegel laughed when asked how much money changed hands. “Money?” said the source. “Money? When has Siegel ever made a dime off his wine writing?”

5 thoughts on “Wine Curmudgeon will sell blog to Wine Spectator”