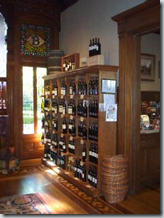 Talk to people in the business, and almost all are tip-toeing around the U.S. economic slowdown, whether it’s a recession, a reduction in growth or whatever term seems to be the most popular.

As one executive told me, literally with fingers crossed: “The numbers I’ve seen say it’s not too bad yet.”

The wine business, and the U.S. part of it in particular, is especially concerned about a recession because they are very much not prepared for it. The last decade has seen almost unprecedented growth, with more wine sold than ever before. Until last fall, most producers were trying expand their business, not preparing for a slump.

So what happens if there is a recession? What will consumers do? What will producers do?

The best numbers so far about growth come from The Nielsen Company’s annual beverage sales report. Only 14 percent percent said they were spending significantly less on wine; almost half said they hadn’t changed spending habits at all. (I’ll have more later in the week, as part of a multi-part series, on what wines the report said we’re drinking — and why.)

The study isn’t on the Nielsen web site, but I’ll email the news release to anyone who wants it. The kicker to the report was that though sales seem to have held steady at off-premise locations like grocery, liquor, convenience, warehouse clubs and other stores, on-premise sales were another story. Consumers said they were going out less often (at some locations by half), and when they did, they were cutting back on wine purchases.

The other side of that, and what has the wine business cautiously optimistic, is that consumers say they will trade up when they drink wine at home. In other words, they won’t go out to dinner and spend $100 on a bottle of wine, but they will buy a $25 bottle of wine to drink at home instead of a $15 bottle of wine. And, in fact, some of the numbers in the survey seem to support that theory. Sales of wine costing  more than $12 increased in the low double digits in the 12 weeks ending Jan. 12, which Nielsen identified as the beginning of the downturn.

For what it’s worth, the anecdotal evidence I’ve seen points to harder times. Wineries are sending me more samples, perhaps twice as many more. In addition, I’m getting better quality samples, including some imported wines I’ve not received before. That seems like an attempt to get publicity for wine that never needed it before.

The other thing to note? The survey was completed in May, based on answers given in the previous three months. No one is quite sure what the next three months will hold.

2 thoughts on “Wine and the economy”