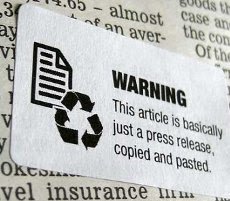 This is not a critique of the science in the Centers for Disease Control study that equated drinking wine with dinner as binge drinking. I’m not a doctor or researcher. I’m also not questioning the health, emotional, and social costs of alcoholism; I’ve attended too many funerals.

Rather, this is a critique (based on a story I wrote for the Wine Business International trade magazine) of the shoddy and slipshod reporting done by most of the media, wine and otherwise, when the study was released. That is something I am qualified to do after 35 years as a journalist.

Journalism, something that I love and have spent my professional life trying to do well, is in a sorry state. How the study was covered demonstrates this all too well. Too many news organizations, regardless of size or reputation, are lazy, sloppy, and willing to accept what someone says — be it the CDC, the government, or big business — without asking questions. And journalism is about asking questions. These days, though, it’s cheaper and easier and less offensive to advertisers if you re-write a news release, throw some hyperlinks in it, and call it reporting. Or rewrite what another news organization has already rewritten.

My reason for being, even in wine, is to try not to do that. Here are the questions the media didn’t ask when the CDC study was released:

• Where did the excessive drinking standard come from? Why is the standard eight drinks a week for women and 15 for men? In fact, these come from a 2006 study in the American Journal of Preventive Medicine, and are based on the U.S. government’s dietary guidelines: “drink alcoholic beverages… in moderation, which is defined as no more than 1 drink per day for women and no more than 2 drinks per day for men.” Which is not exactly the same thing as excessive drinking.

• Why does this study contradict what one eminent cardiologist told me “is a reasonable certainty, based on hundreds of studies over the past decade, that moderate drinking as part of the Mediterranean diet that includes fruits and vegetables, olive oil, and wine, will benefit cardiac health. It’s the difference between partying and wine with a meal.”

• Why now? Why is alcohol suddenly in the spotlight? Note that the CDC study came in the wake of the proposal by the National Transportation Safety Board to lower the blood alcohol limit for drunken driving by one-third.

• Why these solutions — higher taxes, fewer liquor licenses for stores and restaurants, and an end to wet-dry elections and state deregulation? Will these prevent alcoholism, or will they penalize responsible drinkers?