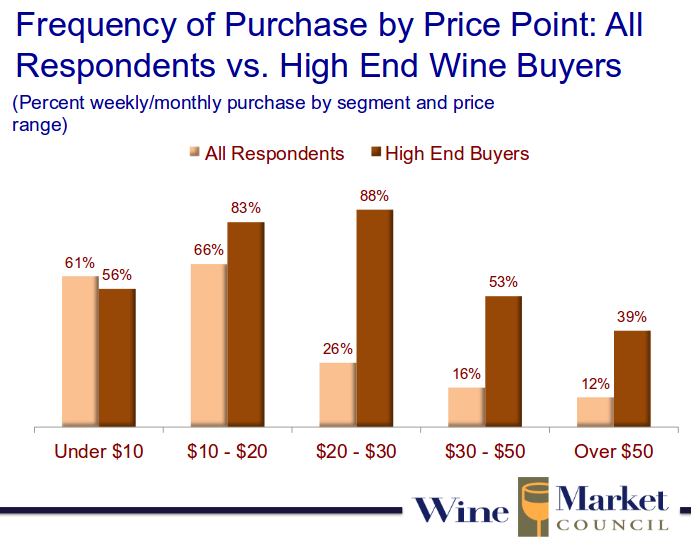 Not that the Wine Curmudgeon had any doubt. But listen to enough people in the business, and especially to the Winestream Media, and it’s scores and romance and tasting notes and about as much foolishness as you can imagine. But we have better evidence than ever that wine drinkers buy wine based on price, in the form of the 2013 Wine Market Council Study.

And what kind of wine do most of us buy, even those of us with deep pockets and subscriptions to the wine magazines? Cheap wine, of course.

The slide at the top of this post says it all. Even the group that the study defines as high-end wine buyers purchases more cheap wine than any other kind, and more than half of their purchases cost $10 or less. Which means they’re buying wine that the Winestream Media loves to hate and almost completely ignores — Barefoot, Cupcake, and Two-buck Chuck among them.

You can parse the study anyway you want, but almost every finding reinforces the idea that price matters most:

? Why do most people join a wine club (and wine club members are some of the wealthiest wine drinkers)? To save money. Almost four in five said it was to get discounts on wine.

? Restaurant wine sales have “steadily eroded” since 2005, both in quantity sold and in dollar volume. At the same time, the average price of a bottle of restaurant wine has increased to $46 and the cost of a glass has gone up to $10. This is a parallel that would surprise only people who sell wine in restaurants.

? Almost half of the group that the study defines as high-frequency wine drinkers — those who drink wine more than several times a week — buy “budget” wine (costing less than $20). And almost one-quarter of high-frequency drinkers buy box wine.

? Per capita wine consumption in the U.S. rose 25 percent between 2000 and 2013, an eye-popping total given that it had been mostly flat since the 1970s, and that period included two recessions. The best explanation for the increase? More and better made cheap wine. “Wine is so much more available than ever before,” says John Gillespie, the study’s author, “and is sold by the glass in very casual restaurants, and with the adoption of wine in early adulthood by millennials, you just have a long term trend toward increasing per capita consumption.”


In one respect, the study doesn’t say anything new, and the 2012 report contained some of the same information. But the depth and detail of the 2013 effort is unprecedented, and that’s what makes it so important for anyone who cares about wine. Yes, my colleagues can keep writing about $100 wine, and plenty of people will keep making it. But in the grand scheme of things, even among the wealthiest of wine drinkers, no one really cares.

4 thoughts on “What drives wine drinkers? Price, of course”