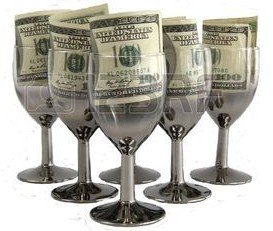 At the beginning of the year, I wrote: “[T]he producer strategy for wine prices in 2015: Stealth increases ? introducing new brands as well as new varietals and blends within existing brands to get us to trade up to a $15 bottle from $10, or to an $18 bottle from $15.”

The new brands bit was correct, but I missed on the stealth thing. Price increases this year, thanks to producers, distributors, and retailers eager to raise prices, have been anything but stealthy. They’ve been, plain and simple, price hikes like we haven’t seen in a decade. How about two Dallas-area grocery stores charging $16 and $18 for two French wines that cost $10 a year ago? Or a new Italian brand, priced at $12, that isn’t any better than the $8 Italian wine cluttering grocery store shelves? Or, and the saddest, a long-time Wine Curmudgeon California favorite that raised prices a little but also used much cheaper grapes to squeeze as much margin out of its product as possible?

Everyone I have talked to in the wine business has said the same thing: Get used to it.

? Forget the stronger dollar, which should make European wines cheaper. Producers are keeping the difference, and neither distributor or retailer is passing on any savings.

? Forget the past three record California harvests, which means none of this is about a phony grape shortage. In fact (and, as Steve McIntosh predicted in January), all those cheaper grapes are being used to cut costs, so that wine quality is suffering. I’ve tasted more crappy $12 and $15 wine this summer, bitter and unripe, than I have in years, and they’ve apparently been made with grapes usually used to make much cheaper wine.

? Forget the idea that consumers won’t spend money on something they don’t know. I tasted a $16 Spanish white, made with verdejo from the Rueda region, that tasted like pinot grigio, and I was the only one who thought it might not sell. I don’t know if arrogance is the right word, but I’m talking to a lot of producers who assume consumers will pay what they’re told to pay because the wine is so special. Special, of course, not having all that much to do with quality but with marketing.

Yes, producers can charge as much as they want for their wine. But there’s a difference between short-term gain and long-term profits, which is how the best businesses are run. When you run your business for short-term gain, you shouldn’t be surprised that wine sales have been flat for several years, or that consumers are more willing to try something besides wine, or that more than one expert is bemoaning wine’s future.