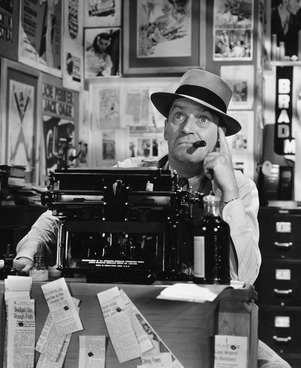 “Hmmm.. what should I write to ruin wine today?”

The WC can’t be trusted. Or so says British wine critic Jamie Goode, one of the most respected voices in the wine world. Writes Goode: “Beware the consumer wine champion.” His cry has electroned its way way through the cyber-ether to hurrahs and huzzahs, and one U.S. blogger even called Goode’s stand “courageous.”

Who knew I was the problem bedeviling the wine business? I could have sworn it was overpriced, crappy wine. But no, writes Goode. His argument: That wine critics who do what I do are frauds, and that it’s wrong for us to say that any wine that someone likes is OK to drink. We’re full of “faux outrage” at the wine business and we have an insidious, unspoken goal — to foist simple, sweet wines on the consumer instead instead of interesting, complex ones.

Which I do all the time, of course, evilly twirling my mustache. (And I guess Goode didn’t see this rant.).

Goode doesn’t mention me by name, and I assume he has no idea who I am; we travel in completely different wine worlds. But his description of the threat to the future of wine is spot on with what I have done for 11 years on the blog. Hence this post, since I consider myself part of the solution — the problem is with those who insist that wine should be difficult to understand and require its users to practice medieval alchemy to drink it correctly. Besides, the closest I come to belonging to any international cabal is my enthusiasm for Linux. And we know how much good that has done.

I have no idea why someone as well-spoken and as intelligent as Goode would write this, which is more like the sort of blather that appears every so often in the Wine Spectator. I argue for interesting, complex wines all the time. I just want them to be fairly priced and to come without reams of winespeak. And it would be nice if they were generally available.

A friend, who sent me the link to Goode’s post, said it was probably a dog whistle, and likely had more to do with internal British wine politics than anything I’ve written. And he may be right.

Still, it’s worth repeating the philosophy that has helped the blog earn its place in the wine world: First, I love wine and I want to share my passion with everyone who finds it confusing and who is afraid of it. Second, there is only one wine rule: Drink whatever you want — just be willing to try something different.