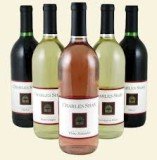 Two-Buck Chuck, the most notorious cheap wine of all, won three gold medals at a California wine competition last week, and the cyber-ether went wild. One member of the Winestream Media tweeted that the result proved that state fair wine competitions were worthless. Another left a comment on a blog, which had defended the medals, taking exception and implying that the competition had been rigged. And then there was this from a winemaker: ?Makes one wonder what the ?experts ? are drinking or smoking. ?

All of which demonstrated the Wine Curmudgeon ?s favorite adage about wine: That people who claim to be experts don ?t have to taste a wine to know that it isn ?t any good. More, after the jump:

This dustup would be funny if it wasn ?t so sad. Why would normally sane people, most of whom are reasonably knowledgeable about wine, be so angry about this?

This sentiment, about Two-buck Chuck in particular and often about all cheap wine, usually carries the day despite any evidence to the contrary. The wines that won the golds were judged by winemakers, so we can assume the judges were qualified. The wines were judged blind, which reduces the chances of a fix, unless there was a vast conspiracy involving the producer and the competition. And, most importantly, the judges tasted the wine. How can we argue with that?

Perhaps. But as one of the few wine writers who regularly writes about and reviews Two-buck Chuck, that approach is the wine writing equivalent of throwing the baby out with the bath water. Sometimes, the wines taste like the mass-produced, corporate plonk that they are. And sometimes, they ?re quite tasty, whether it ?s an accident of winemaking, better quality grapes, or the phase of the moon. How can anyone know unless they taste the wines?

Which leads us to the real reason for all of that cyber-ether unhappiness ? that Fred Franzia ?s Bronco Wine Co. makes Two-buck Chuck, and the Winestream Media sees Franzia as perhaps the most evil person in the wine business. The reasons are many, and include the fact that Franzia has no use for the Winestream Media and reminds them of this at every opportunity. He is the small child who continually flicks the nose of his dog, and the dog doesn ?t have enough sense to walk away.

Consider that there is almost never this sort of outrage when similar corporate wines, like Barefoot (owned by E&J Gallo), Cupcake (owned by The Wine Group), or Little Black Dress (owned by Fetzer) win gold medals. Which they do, all the time. That ?s because their owners don ?t say things like: ?The only thing they have in Napa that’s different ? is 400 public relations people.

Franzia doesn ?t make wine for the romance. He makes it to make money. And that ?s something the Winestream Media can never forgive him for. Because Jeff, you idiot, Charles Shaw wines SUCK!!!!!