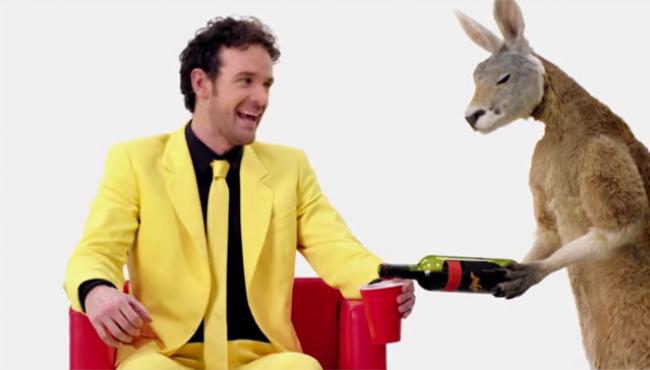 Unfortunately, the roo is back for this Super Bowl.

The Super Bowl and the Wine Curmudgeon don’t mix — never have, never will

Feb. 5 update: Traffic on Super Bowl Sunday was 30 percent higher than a normal Sunday — go figure. Much of the reason? One of the blog’s old standbys, the 1 1/2 year-old La Moneda malbec post, accounted for one-quarter of the blog’s Sunday traffic.

Pro football is going through troubling times — lower attendance and TV ratings, the continuing scandal over deadly head injuries, and boring, too-long games filled with too many commercials.

And the Wine Curmudgeon couldn’t be happier.

That’s because Super Bowl Sunday is usually the worst day of the year for blog visitors, even worse than Christmas. So anything that discomfits an organization that takes visitors away is OK by me. Know, too, that I haven’t watched the game since 1986, which was more or less the last time I got paid to watch it. In the end, as George Carlin has said so memorably, “Baseball is a 19th-century pastoral game. Football is a 20th-century technological struggle.” And I’m old enough to have had enough of the technological struggles of the  20th — and 21st — centuries.

But if you need more, consider these Super Bowl 2018 annoyances:

• The roo is back — because last year’s ad wasn’t nearly dumb enough.

• A restaurant in Minneapolis, where the game will be played, is selling tickets to a wine tasting — where you get one glass — for $35.

• Or you can struggle through this puff piece about Super Bowl sportscaster Jim Nantz, who has a wine label at the “relatively accessible price-point” of $30. And whose wines “are growing more valuable with each vintage.”

So enjoy the game. I might do my taxes. Or clean out my closets. Or scrub my bathroom. Any of which will be more fun than the Super Bowl.