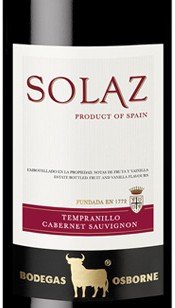 The weather in Dallas was quite unseasonable last week — some 12 inches of snow in a 24-hour period Thursday and Friday, or about the same amount of snow that we get in five normal winters. That would have been bad enough, but the Wine Curmudgeon lost power from about mid-afternoon on Thursday until mid-afternoon on Friday.

Needless to say, I was crankier than usual (and lucky, since many parts of Dallas were without power through this morning). Making me even crankier? No heat, and I was quite cold, despite two heavy shirts, two pairs of socks, sweatpants, a bulky sweater and a scarf.

When the power returned on Friday, just in time for dinner, I knew what had to be done. It was time to drink my final bottle of Solaz.

Three cheap wines stand out in my two-plus decades of writing about cheap wine — a French red called Jaja de Jau, which was about $6 in the 1990s and then disappeared from the Dallas market; Hogue’s fume blanc, about $8 and as good a sauvignon blanc as you’ll find, which is still around but nowhere near what it was after several corporate acquisitions; and the Solaz. And now, all three are gone. The Solaz has been phased out in one of those business decisions that make sense to the people who make them but to no one else. I had picked up a bottle in December during a closeout, and was waiting for the right time to drink it.

I don’t remember when I first tasted the Solaz, but I remember what I did. I went out and bought more, and I have been buying more for at least a decade. I have been recommending it to friends, readers, and wine drinkers for years, and no one has ever complained. It was a fixture in the $10 Hall of Fame.

The Solaz may have been the quintessential cheap red wine: enough fruit to please an American palate, but also some Spanish acid, decent tannins, and a beginning, a middle, and an end. How often can one say that about a $7 wine? (Full disclosure: I visited Spain on Solaz producer’s Osborne dime, but that was several years after I started raving about the wine.)

Osborne made several versions — a white, a rose and three reds. The most common was the tempranillo-cabernet sauvignon blend, my favorite was the rose, and the tempranillo-syrah blend might have been the most interesting. But they were all fantastic.

So I savored my final bottle, the cabernet blend, on Friday night (which I drank with perhaps the best takeout chicken in Dallas — thank you, Cowboy Chicken). The wine and food paired well; one of the Solaz’s strengths, like so many Spanish red wines, was that it was food friendly with more than just red meat. And the wine was what it had always been — and then some. Even though this bottle was a 2006 and not the current vintage, it was still fresh and lively. Most other cheap red wines would have lost their character by now.

And then, suddenly, the bottle was empty. I cleared the table, put the leftovers away, and washed the dishes. The bottle, unfortunately, was still empty. So long, Solaz. I’ll miss you.