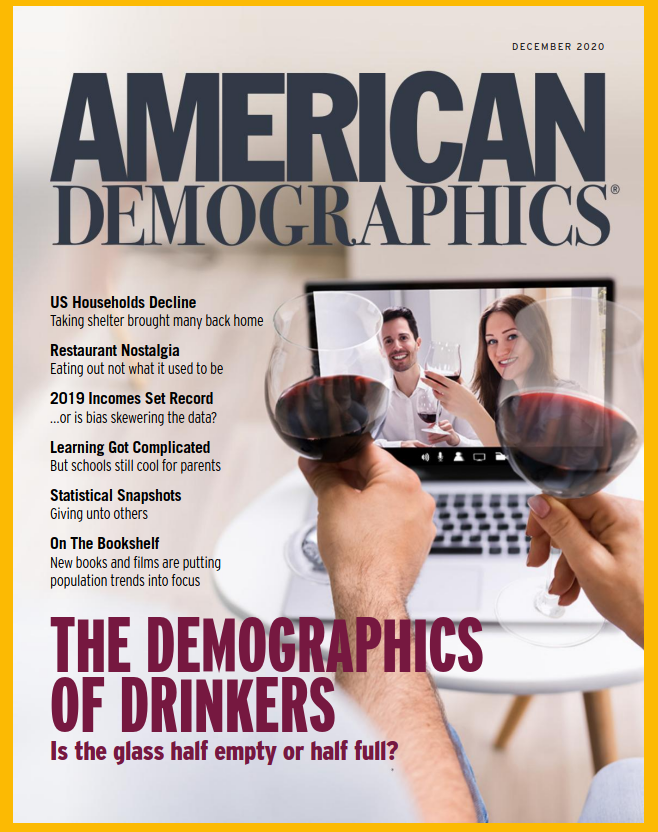 We don’t drink much (and we never really have), what we prefer to drink constantly changes, and religion, gender, and income still matters in what we drink

Know all that foolishness about booze drinking in the U.S.? Prognosticators pontificating about wine, beer, and spirits consumption without any real numbers? That we’re drinking ourselves to death?

Well, forget that. Here are facts – real, certified, mathematical statistics. It’s a freelance piece I wrote for the December issue of the revived American Demographics magazine, “The Demographics of Drinkers.” It starts on page 8 of the linked site.

• U.S. alcohol consumption, per capita, peaked in the years before World War I. In other words, despite all the talk about how we’re passing out in front of our kids and the TV set, we have always been one of the least boozed up industrial countries in the world.

• The 15 or so years between the end of World War II and the early 1960s saw drinking reach a low not seen since Prohibition, less than two gallons per person a year (not even one bottle of wine a month). The reason? No one is quite sure.

• Consumption declined again in the late 1980s, thanks to tougher drunk driving laws, groups like Mothers Against Drunk Driving, and the Just Say No campaign. So today’s drink-free Millennials have nothing on their parents.

• And, perhaps my favorite bit, from a 2019 study by University of California-Davis researchers: People who prefer craft beer are more likely to have voted for Donald Trump in the 2016 presidential election, live in a rural area, drink less expensive or sweet wine if they drink wine, and spend more on alcohol than anyone else. And no one is quite sure why this is, either.

Many thanks to Dane Twining and Tim Simmons, who did the editing on the story, which had more than its share of obstacles on its way to print.

3 thoughts on “The demographic history of the U.S. alcohol consumer”