The blog is off today for New Year’s, but will return tomorrow with our usual features in the run-up to the 2014 $10 Hall of Fame, which debuts on Monday.

Until then, enjoy this primer on wine tasting (courtesy of Holyexpletive on YouTube), which puts everything we’ve talked about on the blog in wonderful perspective. Only wine snobs would think that being a snob would help them get chicks. Or, as the waiter says, “Excellent palate you have, sir.”

There used to be a picture of the dead soldiers from the June 13 under-$15 pinot noir tasting, undertaken at the behest of Beverage Media for an upcoming article (and I still have a half dozen or so to taste). I ?ll link to the story when it runs later this summer and offer my thoughts; several of the wines will also show up on the blog in reviews.

Surprisingly, given the Wine Curmudgeon ?s less than happy experience with a similar sweet red wine tasting, all but a handful of the pinots were professional and sound. A half dozen or so were much better than that, and even those that didn ?t taste like pinot noir were at least drinkable red wine blends.

A tip ?o the Curmudgeon ?s fedora to the legendary Diane Teitelbaum, who tasted the wines with me and made many funny comments along the way.

? What in your wine? The wine industry, for the most part, has ignored the federal government ?s decision to allow voluntary nutrition facts labels on its product. Eric Asimov at the New York Times, though not discussing the labels directly, writes about wine ingredients and offers the following: wine can very much be a manufactured product, processed to achieve a preconceived notion of how it should feel, smell and taste, and then rolled off the assembly line, year after year, as consistent and denatured as a potato chip or fast-food burger. ? The nutrition labels are an opportunity for producers to connect to younger ? and especially female ? wine drinkers, and it looks like they ?re going to pass it up for no good reason other than they think the idea is stupid.

? No money down under: The news just keeps getting worse for the Australian wine business. Only one in four grape growers in the country ?s best wine regions say their business is profitable, while a third of them want to stop growing grapes. And, to make matters worse, grape prices have dropped by half but only about 10 per cent of growers are being paid on time. The numbers come from an Australian government survey, and goes a long way to explain the ongoing crisis in the Aussie wine business.

? How many wines was that? The best way to learn about wine is to taste wine, and Sean Sullivan at the Washington Wine Report knows that first hand. No wonder he won a Wine Blog Award. Sullivan recently tasted 600 Washington wines over the course of  several weeks ? an impressive performance, even by the Wine Curmudgeon ?s standards. The post is worth reading, even if you aren ?t particularly interested in Washington wine, because it ?s some of the best reporting I ?ve seen from a wine writer in a long while. Sullivan eschews the usual sort of wine writing foolishness to give readers something they can use ? hard facts, critical insight, and solid advice. In particular, his discussion of alcohol levels is very good.

The Twitter tasting has revolutionized wine marketing, as anyone who cares about regional wine will happily attest. We have used it with great success at Drink Local Wine, and the monthly Texas wine tweet-off has been equally as successful. People from around the world can comment and taste wine at the same time, linked through nothing more than the cyber-ether.

That ?s why I wanted to participate in the recent Don and Son ?s pinot noir Twitter tasting. The format ? a live webcast combined with a Twitter tasting ? sounded like it could take virtual wine tasting to the next level.

The wine was well done, and reminded me that California can produce quality pinot noir. The Twitter/webcast part, though, didn ?t quite do what I hoped it would, which says more about the wine business than the technology. More, after the jump:

END_OF_DOCUMENT_TOKEN_TO_BE_REPLACED

We ?re doing eight French wines ? six white and two rose, all costing less than $11. And who said wine prices were going up?

You can follow the tasting on Twitter at the #PlanetBordeaux hash tag or follow me at @wine_curmudgeon. (And, in one of those bits of irony that I appreciate, Moet & Chandon — yes, that Moet — follows me on Twitter now. Guess someone there needs a solid $8 bottle of wine when they're tired of all that $100 Champage.)

The event starts at 6 p.m. central. The Other Wine Guy, who recently celebrated the birth of his first granddaughter, will be on hand to help taste the wines, but he ?ll probably make me do all the tweeting.

Those of you who prefer wine reviews that are longer than 140 characters can check out the blog on Monday, when I ?ll post a more traditional account of the tasting.

Do you have to be a super taster to enjoy wine?

The latest research seems to confirm the newest trend in wine — that some of us are better at tasting wine than others. The study, conducted by researchers at Penn State and Brock University in Canada, found that the so-called experts can taste subtleties in wine that the rest of us can’t.

This is just another in a long line of studies about wine palates that separate the world into people with various degrees of wine tasting ability. A Yale scientist, Linda Bartoshuk, divides the world into three groups: Super tasters, about 25 percent of the population; tasters, about 50 percent; and non-tasters, about 25 percent. The first group is above average, the second is average, and the third is below average.. Women are a little more than twice as likely to be super tasters as men, according to her work.

The Wine Curmudgeon is not here to argue with the science behind this research. There is little doubt some of us taste wine better than others, just as some of us jump higher or dance better than others. But what does bother me is the assumption too many people take from these studies, and especially from the news reports of these studies — that if you’re not a super taster, you can’t possibly enjoy wine.

I was quite possibly the worst softball player in the world. I couldn’t throw, my swing was slow and powerless, and I ran like a cardboard box. But I loved playing softball, whether it was in gym class or recreational leagues. Yet, by applying the logic that is inherent in so many of these stories about wine tasting ability, I should not only should not have enjoyed softball, but I never should have played it because I was so bad at it.

This is silly, and it’s one of those things that drives me crazy about wine — and goes a long way toward explaining why more of us don’t drink wine. Why bother to drink wine when we’re told only an expert can appreciate its flavors? It’s more or less what this story implies, and I run into it almost every time I talk to wine drinkers about drinking wine.

The first two things most of them do is apologize for not knowing more about wine and for drinking what they assume is crappy wine. Then they ask me how I can possibly taste all the flavors in wine; I must be special or something. (Obviously, they never saw me play softball.)

In other words, they are intimidated by my wine knowledge. That I have been drinking wine regularly for more than 25 years doesn’t make them feel better. Or that I taste almost 500 wines a year. Or that I talk to winemakers and other wine types all the time, asking questions and learning things. The consumer side of the wine business is so screwed up that most wine drinkers don’t see a difference between how I approach wine and how they approach it. That they only buy wine a couple or three times a month at the grocery store isn’t enough to explain why I know more than they do. It must be their fault; they must be flawed in some way.

Their only flaw, as my pal Dave McIntyre has admirably pointed out, is that they don’t pay as much attention as we do. But they have a ready made excuse. They myth, as perpetuated by the experts and their allies in the Winestream Media, is that that they can’t possibly appreciate what they’re drinking.

Or, as a wine drinker named Allison Davis put it so brilliantly last fall: “There is no safe place to really learn about wine. There aren’t any places where you can ask a stupid question. If you ask a question, it’s as if the attitude is, ‘Why don’t you know this already?’ instead of ‘Why would you know this?’ Because wine is so complicated, and there is so much to learn and who has the time to figure all this out?”

So they don’t bother. After all, they don’t have a good enough palate.

One day, perhaps, the wine business will figure out that everyone is entitled to enjoy wine, regardless of palate. Until then, I’ll keep reminding everyone that wine, like softball, can be fun regardless. And who better to know than someone who ran like a cardboard box? 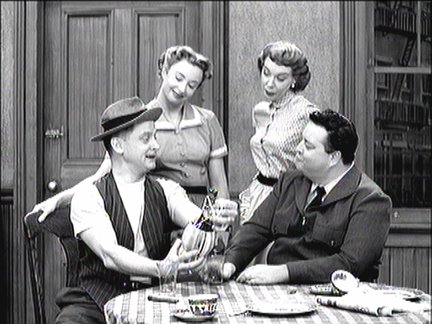 Norton thinks Chianti makes all the difference in the world

Usually, when the subject of wine and food comes up, it’s about pairings — what goes with what, and often in such nuance that it scares the hell out of beginning wine drinkers. Which may be one reason why wine and food pairings are becoming increasingly less important to many wine drinkers.

The Wine Curmudgeon has been pondering this for a good while, trying to figure out a way to write about pairings that wouldn’t drive new wine drinkers crazy (as part of my resolution to make the blog more accessible to people who are new to wine).

Which led to the thought: Are we putting the cart before the horse? We’re telling people to pair certain wines with food under the assumption that the food will taste better. Is there any evidence to support this?

In other words, when I’m drinking an unoaked chardonnay with roast chicken, does the chicken taste better than if I had been pairing it with sweet tea or a soft drink (something I see very often in Dallas, where restaurant diners seem to drink more of the last two than the first). The answer: No one knows for sure. More, after the jump: