• Best regions: One reason why the Wine Curmudgeon doesn’t care much for top 10 lists is that you don’t know who is behind them. As in: Why is the Accor hotel chain proclaiming the U.S. the best wine region in the world? What does that have to with inn keeping? But there it is – the U.S., followed by France, Italy, and New Zealand. The methodology is spotty (scores from a crowd site), which devalues the results — as if there could be legitimate results for something like this. And it still doesn’t answer why Accor felt the need to do this.

• Best books: The two best wine books, in terms of understanding wine and figuring out who wine works, are porbably Kevin Zraly’s Windows on the World and Wine for Dummies, by Ed McCarthy and Mary Ewing Milligan. So how do they fare in a ranking by something called BookAuthority? Ninth and 27th. And how authoritative is BookAuthority? ” BookAuthority identifies and rates the best books in the world, based on public mentions, recommendations, ratings and sentiment.” Taking quality into account would have have been nice, but one can’t expect much these days.

• Bring out the c-notes: If you have $100, then a Dallas restaurant will sell you a glass of a Robert Parker 100-point wine, the 2012 Verite La Joie Bordeaux Blend. Veritie is a Sonoma producer; the current version of the La Joie costs $400 a bottle. Still, I’ll pass, even though the restaurant is throwing in a couple of Riedel glasses. For those of you who are intrigued, the 2012 “is an incredible glass of wine featuring exuberant notes of red currant, black plum and cherry framed by subtle French oak nuances like powdered cocoa and cedar with a balanced finish.”

? The big get bigger? An industry analyst says Diageo, one of the biggest wine producers in the U.S., should merge with beer giant SABMiller to increase profits as the global drinks business slows down. Talk about Big Wine: the combined company would total $8 billion in sales, and its products would include Miller beer, Johnnie Walker scotch, and Rosenblum and Sterling wines. How do we know the speculation is more than gossip? The news story included the word synergies, as in the combined company would save money because it had them. As regular visitors here know, synergies — which, like unicorns and wood nymphs — exist only in the minds of those who believe in them, and are always given as an excuse for a multi-national merger. Because, otherwise, what’s the point?

? A wine snob temper tantrum: The Italian Wine Guy, who knows more about Italian wine than almost anyone else in the world, recounts his experience with a wine drinker, and it’s not pretty. The customer wanted a 100-point Robert Parker Brunello, and he wasn’t going to suffer anything as foolish as advice from one of the most knowledgeable Italian wine people in the world. What’s worse is that the customer was rude about it, treating the Italian Wine Guy as if he was some idiot foisted on the customer by an inept store owner. This is the harm in scores, regardless of anything else: If all we do is buy wine by scores, we cheat ourselves of all wine has to offer. It’s snobbishness of the worst degree, as bad as the snobs who make fun of people who drink sweet wine.

? Calling wine by its regional name: The U.S. and the European Union have been arguing for some 20 years about strengthening the international agreement that prohibits U.S. producers from calling their sparkling wine Champagne and stops French companies from calling their potatoes Idaho. Now, though, the two sides may be close to an agreement, thanks to a U.S. compromise. The article, from the Conversation.com website, is long and little legalish, but it does a good job of explaining why these trade laws exist, why the U.S. traditionally didn’t care for them, and what might happen next. Who knew Feta cheese was a deal-breaker? 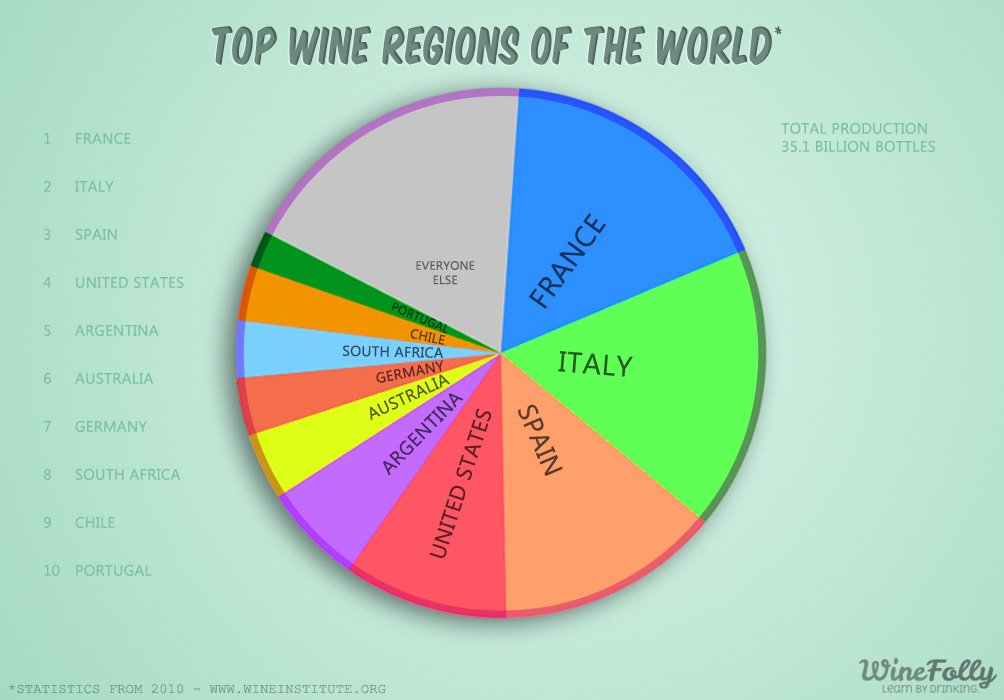 How does one find the next big wine region? Is it something the Winestream Media can anoint by giving out scores and fawning over celebrity winemakers? Is it something the industry can do, in the way Sonoma has been marketing itself? Or is it about the quality of the wine, where the region works its way into our consciousness without much help from anyone?

Or is finding the next big wine region one of those quaint 20th-century things, like VCRs and walkie talkie-sized cell phones, something that doesn’t make much difference in the post-modern wine world?

The genesis for this post came from a blog visitor, who wanted to know why I don’t do more to identify wine regions that offer wines that people come here to find. I’m not sure that’s true — see my support for Sicily and Gascony — but it did make me wonder. What will be the next Sicily or Gascony, and how do we find it?

I’m sure that we won’t find it from the Winestream Media. It has been hyping Austria for years, mostly for gruner veltliner, with little success. That’s because, despite the enthusiasm for gruner, there isn’t enough of it to matter. The next big wine region has to produce enough wine for people to be able to buy it.

I’m also leery of industry-sponsored next big things; that approach gave us pet rocks. This doesn’t mean there isn’t great cheap wine in Sonoma. Rather, Sonoma, for all its insecurities, is an established part of the wine world, and that’s enough to rule it out.

Which means the next big wine region will sneak up on us, like Sicily did. And, wherever it is, it will offer the following:

? Favorable pricing, which means $15 or less. Otherwise, Napa and Bordeaux would be the next big thing. Which they’ve already been.

? Grapes that aren’t chardonnay, merlot, and cabernet sauvignon. Because what’s the point of the next big wine region making the same thing that everyone else does?

? Professional quality, which means consistently made wine from vintage to vintage. This rules out much of the regional wine business, where one great vintage is followed by several ordinary ones.

? Sufficient distribution, as well as enough production, to get its wine into retailers. Unglamorous yes, but that’s probably why Greek wine hasn’t made much headway. There’s enough of it, quality is adequate, the varietals are interesting, and pricing is favorable. But unless you’re on the East Coast, it’s almost impossible to find Greek wine in a store.

So what regions fit those requirements?

? Italy’s Abruzzi, with red wine made from the montepulciano grape. The only problem here is that the wines, if not old-fashioned, don’t have the ripe fruit that American wine drinkers have come to expect.

? New York’s Finger Lakes and its incredibly delicious rieslings. Distribution, thanks to large producers like Konstantin Frank and Ravines, is much better than most people realize, though pricing might be too high.

? Somewhere in Spain, and I wish I could do better than that. But Spain has 66 major wine regions, many of which produce wines amazing both in price and quality, and picking one instead of another is an exercise in confusion. Best guesses: Rueda, for whites made with verdejo, and Madrid, for red blends.