? Patty Bogle dies: Bogle, the matriarch of $10 wine powerhouse Bogle Vineyards, has died. She was 59. Patty Bogle and her late husband, Chris, built Bogle Vineyards from 18 acres of grapes into one of the best inexpensive wine producers in the world. The company ships more than 1.2 million cases of wine annually, and Wine Business Monthly ranked Bogle as the country's 14th-largest winery. She was diagnosed in 2007 with leukemia, which eventually killed her. She will be much missed by those of us who appreciate cheap wine.

? Grape prices below break-even? A followup to last week's item about the 2010 grape harvest and low grape prices: California producers say that although grape prices strengthened in 2010 from 2009, 2010 was not a good year and that many of the region ?s growers still face below break-even, especially those with expired contracts or grapes that aren't chardonnay or cabernet sauvignon. One analyst says he doesn't expect to see grape prices rebound until the 2012 harvest. Which means at least another two years of consumer-friendly wine prices.

? Champagne sales still flat: The recession hasn't ended for the champagne business, where sales are still 12 1/2 percent behind their 2007 peak and industry officials says they're still worried about the business and its immediate future. On the other hand, reports the just-drinks.com Web site, some producers may be finagling sales figures to prevent the industry officials from releasing excess inventory to the public, which would depress prices. The Wine Curmudgeon, of course, has a solution for champagne, which is too often overpriced. Stop acting like OPEC and let the market determine what your product is worth.

? Grape crush third highest ever: California crushed 3.7 million tons of grapes in 2010 — the third-largest crush to date, reports WineBusinessNews.com. The good news for consumers? California grape prices fell by almost seven percent, and so wine prices should continue to be "consumer-friendly" for the next couple of years. Otherwise, the figures are quite contradictory, and trying to make sense of them is not easy. Some of the numbers show that the price for Napa grapes declined by more than seven percent, which would be a crisis of epic proportions. On the other hand, says the magazine, looking at another set of figures, maybe they increased one-half of once percent.

? Changes in the Robert Parker empire: Jon Bonne at the San Francisco Chronicle details key changes in the way Robert Parker — the most important person in the wine business — will review wines. The story is very long, and a lot of it is very inside baseball, but there are a couple of things worth noting. Parker is going to review fewer California wines, which Bonne called "stunning news," and the critic who will take over California probably won't be all that different from Parker. "Those awaiting the demise of big, hedonistic cult wines are probably out of luck," wrote Bonne.

? Corks to shoes: Our friends in the cork business, who keep insisting that you're not one of the cool kids unless you drink wine that has a cork closure, have enlisted the Grammy Awards to spread their message. Wines sealed with cork will be served at a fundraiser honoring Barbra Streisand and at the official Grammy celebration. Plus, the corks will be recycled to make shoes. Which raises an important question: When did the Grammy awards become cool again?

Some thoughts to follow up on the December post about what the experts are calling consumer-friendly wine prices in 2011:

? Italy invented pinot grigio as a wine to sell in the United States, but the recession may have helped change Italy’s pinot grigio dominance. Alfonso Cevola, the Italian Wine Guy, has done an analysis of selected U.S. pinot grigio sales for 2010, and California looks like it will replace Italy as the varietal’s top producer. There are a couple of couple of caveats, says Alfonso, but his conclusion looks solid. And the reason California is passing Italy? Cheaper wines, such as Barefoot, which are replacing Italian brands that cost $10 or more. “Value wines still reign,” he wrote.

? How far have white zinfandel sales fallen? So far that Beringer, which is among the top two white zinfandel producers in the country, is not only price cutting, but marketing. And the last time anyone needed to market white zinfandel in the U.S. Never, probably. Beringer is giving away a downloadable single from crooner Michael Buble, and has teamed with Buble to pair wine, songs, and food. This is a lot of trouble to go to sell a $7 wine.

? The Wine Economist blog has put much of what has happened over the past couple years in perspective, and has discovered consumer-friendly pricing in the process.  “As I am writing this, the neighborhood Safeway is offering an extra 20% off any wine selling for $20 or more,” noted Mike Veseth, who posted that the sales increase in more expensive wines that has the industry so excited is almost certainly coming from this kind of discounting. 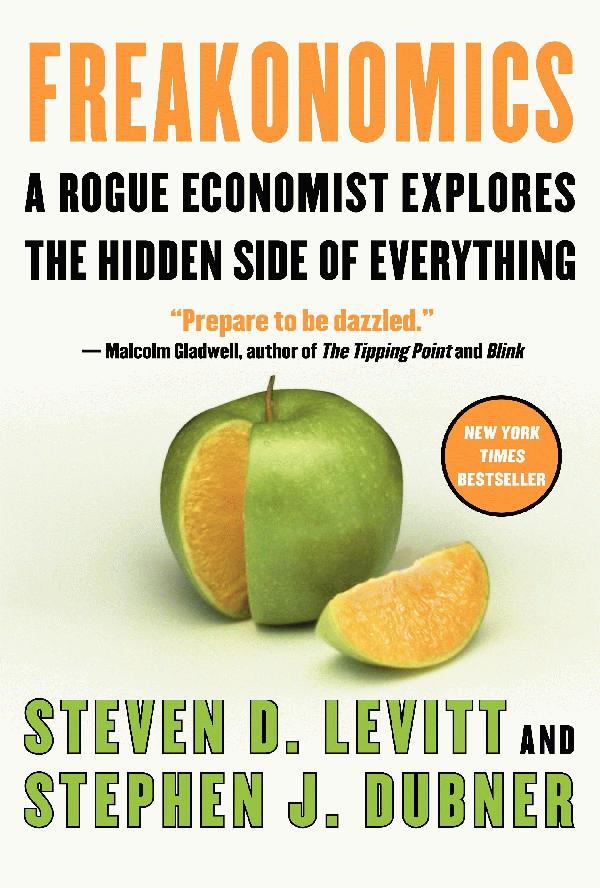 Stephen Dubner is the co-author of the popular Freakonomics books and blog, which look at economic theory from a less than traditional perspective. In this radio interview transcript, Dubner talks about wine prices and the wine business, and whether price reflects quality and whether the experts are really experts.

A couple of the Wine Curmudgeon's pals show up, including Robin Goldstein of The Wine Trials, and it's a decent discussion of the objective vs. subjective nature of wine quality and wine prices. Which is nothing new to regular visitors here.

But anyone who appreciates what we do on the blog will love this. Dubner quotes his Freakonomics co-author, Steven Levitt: "My approach to buying wine for gifts is simple: I go in the store, and I look for the label that looks the most expensive of anything in the store. And I make sure it costs less than $15, and if it does, then I buy it."

Maybe I should should send each of the Steves a tin of Wine Curmudgeon M&Ms.

I’ve been digging around for the last couple of months, trying to get a sense of where wine prices are headed in 2011. My gut feeling is that we’re in for at least another year of oversupply and lower prices, with lots and lots of previous vintages still clogging winery back rooms and distributor warehouses. The recession may have officially ended, but the wine business is far from recovering.

And that seems to fit with the anecdotal evidence I’ve seen — news stories, talking to retailers and distributors, and walking around grocery and liquor stores and comparing prices. I saw Perrier Jouet, a $40 bottle of Champagne, going for $25 in an ordinary, national chain grocery store. Three years ago, the producer would have refused to allow its wine near the store, let alone be sold there or discounted.

The best description of where we’re going? It came from a Dallas retailer whose family has been selling wine for about as long as it has been legal to sell wine in Dallas. “I call it consumer-friendly,” he said. “Pricing will be beneficial to the consumer. There’s still a lot of wine out there, and there are still a lot of deals to be found. I’m buying them whenever I can.”

So, for at least another year, $10 is still the new normal.

? 2011 Vintners Hall of Fame: And it doesn’t include Robert Parker or Fred Franzia, both of whom were nominated. This is silly. Both men, whatever you think of them, have had Hall of Fame careers, and I’ll write more on that later this week. The 2011 inductees will include Ravenswood founder Joel Peterson (subject of a Wine Curmudgeon podcast); UC Davis’ Vernon Singleton; and Bob Trinchero, owner of Sutter Home Winery and Trinchero Napa Valley. Chalone Vineyards winemaker Richard Graff and August Sebastiani will be inducted as Pioneers.

? Exorbitant wine prices: What do you do if you live in China and have too much money? You buy French wine. Decanter reports that Asian bidders paid stratospheric prices in a recent Hong Kong auction. Two cases of 2009 Chateau Lafite, which won’t be bottled until next year, fetched US$68,632. That’s almost six times the estimate. And a case of 2000 Lafite, estimated at US$20,000-30,000, sold for US$71,751. Said one analyst: “There is a lot of money out here, and a lot of demand for good cellars. But even taking that into consideration, those prices were crazy.”

? Feds looking at wine terms: Ever wondered what wine terms like Proprietors Blend, Old Vine, and Reserve mean when they show up on wine labels? The Treasury Department’s Alcohol Tax and Trade Bureau, which oversees label regulation, wonders too. It is asking for public comment on whether it needs to write regulations for those terms, as well as several others. You can download the request for comments from the TTB site. It’s Notice No. 109. It’s not too difficult to read, either.

Shansby finishes the story and I laugh. He has outlined, neatly, the dilemma facing those of us who do wine education. Yes, this story is about tequila and spirits, and I usually don't do much of that here. But Shansby is also a wine drinker who knows how the business works, and Partida makes some damn fine tequila. I was especially impressed with the blanco (about $45, sample), which had almost nothing to do with the cheap, poorly made tequila that one sees around Dallas.

Besides, the principle is the same, whether we're talking about tequila or pinot noir. It's not enough that wine is confusing. We also have to fight the prejudices that consumers pick up, many of which are fostered on consumers by the companies that sell wine.

In fact, he says, those attractive prices are going to be around for a while. The recession is the main reason (and he expects its effects to be with us for a long while), which is something we've discussed here many times before. Producers are stuck with unsold wine, with more wine in the production pipeline, so they are cutting prices to move it. Shansby says it won't be unusual to see discounts of 20 to 40 percent. So why not take a chance and experiment? Why not try a wine from a different region than your usual? Why not try a different varietal?

Just don't, says Shansby, let your prejudices make your decisions for you. And who can argue with that.