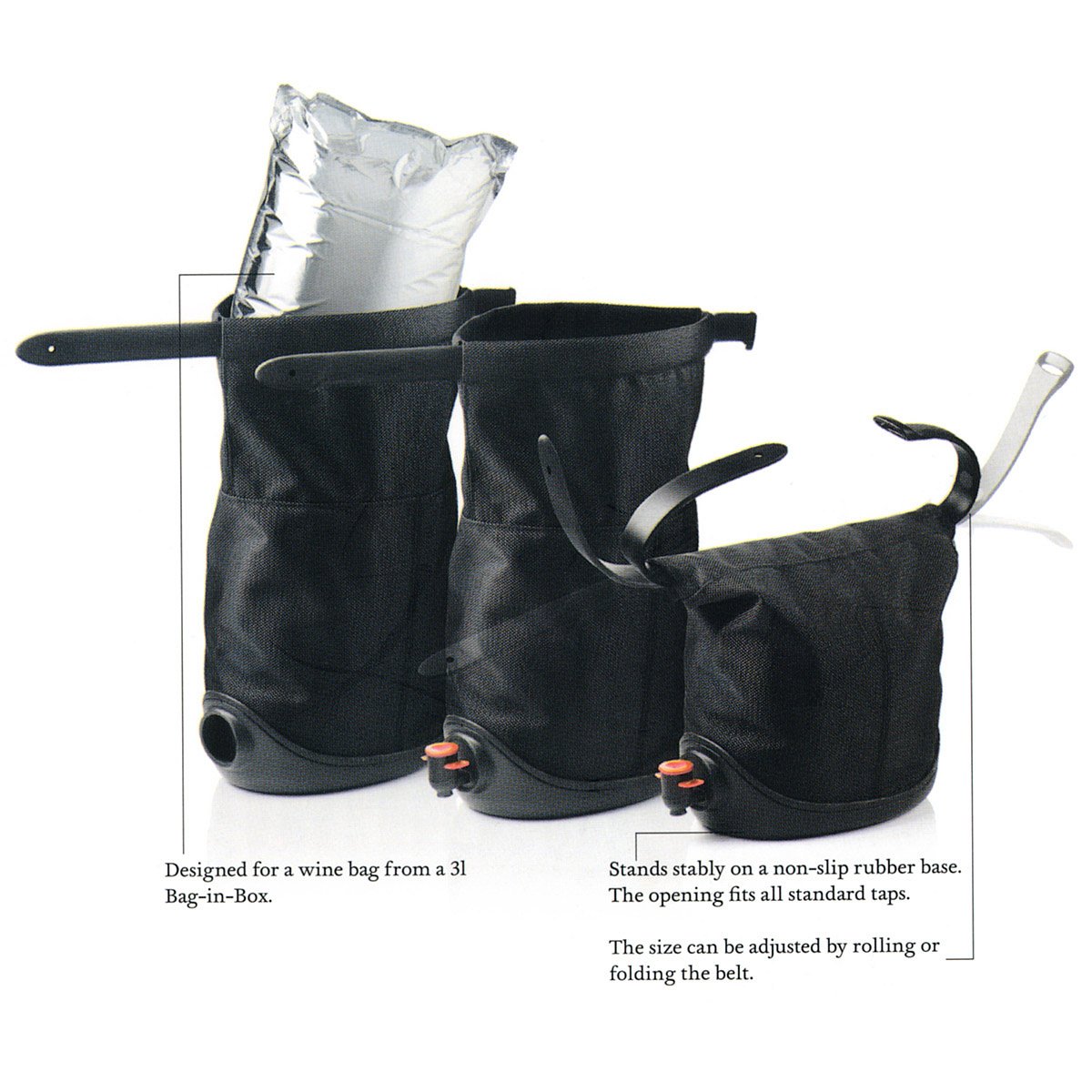 Yes the Wine Sack is chic, but also ridiculously expensive.

? Wine openers: Still don’t feel comfortable with a waiter’s corkscrew? The Vinomaster ($40) is a sturdier version of an old reliable, Metrokane’s Rabbit, and at more less the same price. I was impressed with how well put together it was, though it’s not quite as intuitive as the Rabbit. The Barvivo corkscrew ($15) is a nifty turn on the traditional waiter’s corkscrew, with a more flexible double hinge.

? Wine books: I would be remiss without mentioning Jon Thorsen’s “Reverse Wine Snob: How to buy and drink great wine” ($18), which follows up on the work he does on his Reverse Wine Snob website, regularly ranked among the top five most influential wine websites on the Internet. Also intriguing: “American Wine: A Coming-of-Age Story” ($30), by Tom Acitelli, which tries to tell the story of the U.S. wine business from the 1960s to today in English and not winespeak. It mostly succeeds, and has generated some criticism for its explanation of the growth — and popularity — of high alcohol wines.

? Wine: This is the year for something different, a wine made with grapes or from a region that you might not buy often (or at all). How about the Jim Barry Lodge Hill Riesling from Australia ($15, sample, 12.5%), a dry wine full of petrol and lemon? Or the Domaine Serol Les Originelles ($15, sample, 13.5%), a gamay from the Loire in France that is as fresh and intriguing as it is unusual?

? As silly as we’re getting: The ridiculously expensive Wine Sack ($70), which gives you a way to carry your box wine with you in a fashionable black carryall. The bladder inside the box that holds the wine slips inside the Wine Sack, and the bladder spout fits in an opening on the Wine Sack. Why ridiculously expensive? Because the point of box wine is how cheap it is, and do we really need an accessory for it that costs as much as 3 1/2 boxes? But it does look chic. 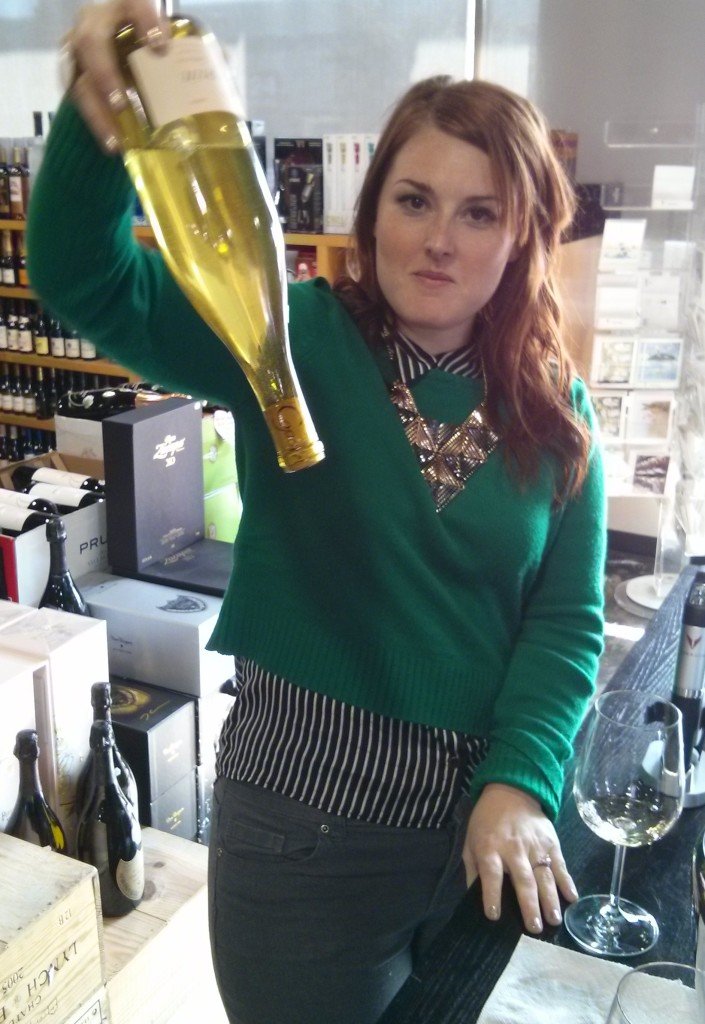 Coravin is the new, hip, and incredibly well-reviewed corkscrew that lets you open a bottle of wine without taking out the cork. As such, it is as revolutionary as the company says. But it’s the $300 Coravin question that remains unanswered: Is it necessary to spend that much money on a wine gadget?

Make no mistake: the Coravin does what it says it does. Shasha Dotras (that’s her in the photo) impressed almost everyone who saw her demonstrate the opener recently at Pogo’s in Dallas. The hollow needle, which has a hole in the sharp end, pushes through the cork, argon gas is fed into the wine, the wine flows through the needle, and the opener’s handle works like a spigot. Pull the needle out, the argon gas fills the empty space, and the cork expands to fill the hole left by the needle. The wine remains mostly as fresh as before the Coravin.

But is that it works enough? If it costs $300, then it had better be worth $300 worth of wine, be they 30 bottles of $10 wine or three bottles of $100 wine (and that doesn’t include $11 each for the argon capsules). And that’s a difficult standard for any gadget to meet.

Further complicating the price/value discussion is that most of us don’t need the Coravin. There are four glasses in a bottle of wine. I open a bottle at dinner, and I have two glasses and the person with me has two glasses. When are we going to use the Coravin? And most people who don’t finish a bottle are more than happy to replace the cork or screwcap, put the bottle in the fridge, and drink the rest later. The idea that oxidation exists and could spoil their wine is something only wine snobs worry about.

So who would benefit from the Coravin? Professionals who taste a lot of pricey wine one glass at a time, but that can hardly be a market big enough to make a difference. Maybe there’s demand for a restaurant version, though given the level of training at most restaurants, breakage would probably make the Coravin prohibitively expensive.

This leaves everyone who has a cellar stuffed full of expensive wine, has lots of money to spend on gadgets, and sees wine as something to collect and not necessarily drink — probably less than five percent of the U.S. wine drinking population. In other words, the Winestream Media’s typical wine drinker. Which no doubt explains this. And this.

In this, the Coravin may well be to wine what the granite counter top is to home renovation — it sells well and is really nice to have, but isn’t going to make dinner any easier cook or taste any better. Which answers the $300 Coravin question for me.

Suggestions for the wine drinkers on your list. Don't forget the wine gift-giving guidelines ("Don't buy someone wine that you think they should like; buy them what they will like") and Champagne and sparkling wine glossary. More, after the jump: