Panera, the high-end sandwich chain, said it would eliminate a variety of artificial preservatives, flavors and colors, as well as different kinds of sweeteners, reported the New York Times. This followed news that Nestle, which has been on the wrong side of many of these discussions, would eliminate artificial flavorings and colors from Butterfinger, Baby Ruth, and Nesquik. Meanwhile, Simon Unwins, former chief marketing officer for British mega-grocer Tesco, said it was time for his business “to be seen as leading the fight for less processed foods, on behalf of their customers.” And the woman at the deli counter at my local Kroger spent a couple of minutes telling me how the chain was eliminating fillers in its private label sandwich meat.

Said an expert quoted in the Times story: “To me, this has gone way beyond anything that could even be remotely considered a fad and become a powerful trend.”

Unless, of course, you’re in the wine business. Then you hold your breath, stomp your feet, and pound the table, shouting, “No, no, no, no!” when you do take a breath.

Which doesn’t accomplish much. As the expert noted, ingredient transparency is here to stay, whether the wine business wants it or not. Over the next couple of years, Big Wine will add ingredients and nutrition facts to its wine, thanks to the new voluntary program, and reap the benefits. And, as the rest of the wine business holds out for reasons that no one who isn’t in the wine business understands, consumers will start to wonder if wine has something to hide. The industry squeezed through the arsenic scare, but only because the people doing the scaring were so dodgy. What happens when the next scare comes from a consumer watchdog like the Center for Science in the Public Interest or the federal Centers for Disease Control, hardly well disposed toward wine? Or even the FDA?

Good luck squeezing through then.

One final note: It is possible, despite industry protestations to the contrary, to include nutrition facts on a wine bottle without the world coming to an end. This link shows how Toad Hollow did it on its Risque sparkling wine, which needed nutritional information because it was less than seven percent alcohol. Amazing how easy that was, isn’t it? 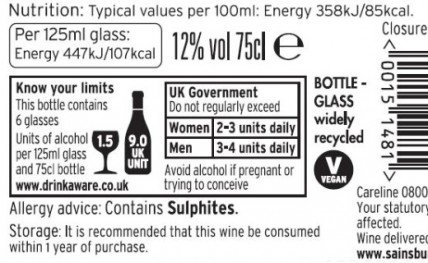 Because the controversy about soup-style wine nutrition labels is not going away.

? What do consumers want? As much information as possible, reported the British wine magazine Decanter, citing a study that says two-thirds of UK adults “actively support” calorie labeling on alcoholic drinks. Not surprising: That four out of five people surveyed couldn’t accurately estimate the calories in a large glass of wine. The study “shows there is now a clear public appetite for this information to be extended to alcohol to help individuals make informed choices,” said the chief executive of the Royal Society for Public Health, which paid for it. Sainsbury’s, one of the country’s biggest supermarket chains, said it would put calorie counts on all of its private label alcohol within two years (pictured above).

? Let’s not go too far: That’s the opinion of Mike Steinberger, one of the best wine writers working today. “But allow me a moment of devil’s advocacy; while full disclosure on labels (or as much disclosure as a standard wine label will permit) is a laudable goal, there are a few sticking points worth acknowledging. To begin with, the comparison with food is misguided. Unlike food, wine is not necessary for sustenance (it only seems that way), so the need-to-know argument does not carry nearly the same weight.” The longish piece is worth reading, though I don’t necessarily agree with all his points. I think Steinberger overlooks the 20-somethings who are the next generation of wine drinkers, and that labels could change the way they buy wine.

? Yes, absolutely: That’s the opinion of Alice Feiring, perhaps the leading natural wine advocate in the U.S. “For a long time I’ve been in favor of less government in wine instead of more, but in this instance I have to fess up that with so many additives allowed in wine, an ingredient label is best. If there’s an ingredient list for soda, there needs to be one for wine. If you are warned about an orange juice from concentrate, the same should be true for wine that has been reverse osmosed/concentrated.”

? Ewwwwww: The Wine Curmudgeon has long advocated ingredient labeling for wine, despite intense opposition from the industry (including many of my friends, who tell me I’m crazy). Still, as the blog’s travel and resort correspondent recently emailed me: “I was offered a glass of wine from a box, from which I happened to read the fine print. It says ‘ascorbic acid added as a preservative’ and there is something added called Allura Red Dye #40 for ‘color stabilization.’ This must be a killer wine because it has other cool stuff, too: pectins, acetaldehyde, ethyl acetate, esthers, benzoic acid, and keytones. I remember keytones from college ? they ?re a sort of hallucinogen, not unlike mushrooms. The only thing that is a little concerning is a warning that says ‘added catechins and other phenols may combine with aluminum, barium and cadminium creating benzaldehyde ? a known carcinogen.’ But let ?s not worry about that. Man, I can ?t wait to try this stuff.”

? The French Paradox: One reason why I’m here to write this, and you’re here to read it, is because the “60 Minutes” television program ran a story in November 1991 about why the French — who smoked, drank copious amounts of wine, and ate red meat — lived relatively long, healthy lives. The program concluded that the reason was red wine, and the U.S. wine boom — which is still going on — began at almost that moment. The International Food & Wine Society website has a short piece discussing the “60 Minutes” episode, with a clip. Can it really have been 23 years ago? Have wine’s health benefits really done a 180 since then?

? Keep it in context: Dan Berger adds welcome perspective to the debate about wine judging with this article. Unfortunately, given the size of many competitions, judging is about pace almost as much as quality. That means, Berger writes, that “the faster the evaluation, the more often showy wines take the spotlight. As a result, subtlety rarely is rewarded in today ?s wine-tasting world.”

Last month ?s news that the federal government would allow nutrition labels on wine was mostly ignored by the wine business. Hardly anyone wrote about it, and the emails that I got said wine drinkers weren ?t interested in nutrition labels and I would know this if I paid any attention to the real world.

Actually, the reverse is true. Wine drinkers are interested. The problem is that too many in the wine business don ?t understand who their customers are or want they want. More, after the jump:

END_OF_DOCUMENT_TOKEN_TO_BE_REPLACED

? What in your wine? The wine industry, for the most part, has ignored the federal government ?s decision to allow voluntary nutrition facts labels on its product. Eric Asimov at the New York Times, though not discussing the labels directly, writes about wine ingredients and offers the following: wine can very much be a manufactured product, processed to achieve a preconceived notion of how it should feel, smell and taste, and then rolled off the assembly line, year after year, as consistent and denatured as a potato chip or fast-food burger. ? The nutrition labels are an opportunity for producers to connect to younger ? and especially female ? wine drinkers, and it looks like they ?re going to pass it up for no good reason other than they think the idea is stupid.

? No money down under: The news just keeps getting worse for the Australian wine business. Only one in four grape growers in the country ?s best wine regions say their business is profitable, while a third of them want to stop growing grapes. And, to make matters worse, grape prices have dropped by half but only about 10 per cent of growers are being paid on time. The numbers come from an Australian government survey, and goes a long way to explain the ongoing crisis in the Aussie wine business.

? How many wines was that? The best way to learn about wine is to taste wine, and Sean Sullivan at the Washington Wine Report knows that first hand. No wonder he won a Wine Blog Award. Sullivan recently tasted 600 Washington wines over the course of  several weeks ? an impressive performance, even by the Wine Curmudgeon ?s standards. The post is worth reading, even if you aren ?t particularly interested in Washington wine, because it ?s some of the best reporting I ?ve seen from a wine writer in a long while. Sullivan eschews the usual sort of wine writing foolishness to give readers something they can use ? hard facts, critical insight, and solid advice. In particular, his discussion of alcohol levels is very good.