SVB wine report 2020: The wine business is hurting, and things are going to get worse before they get better

How upside down is the wine world? This week, during the annual Silicon Valley Bank state of the wine industry webcast, one of the panelists said something that was almost unprecedented:

“We need to pay better attention to consumer demand.”

Which, as regular visitors here know, is the opposite of what we’ve heard for decades, and especially since the end of the recession and the growth of premiumization. The wine business knew best, and sold us what it said we needed, and not necessarily what we wanted.

Because that’s how we ended up where we are today, with decreasing wine sales, decreasing demand, and decreasing interest in wine among younger consumers. Which, not surprisingly, was the theme during this year’s wine industry webcast. Rob McMillan, the executive vice president and founder of the Silicon Valley Bank wine division, put it bluntly on Tuesday morning: The wine industry has to change the way it does business and focus on what makes wine worthwhile. It can no longer assume that consumers will drink wine because they always have.

And, reinforcing just how different things are from where they were just a couple of years ago, McMillan said it was time for wine to reconsider its objection to nutrition and ingredient labels. Because, of course, that’s what consumers want.

We ain’t in Kansas anymore, are we?

The rest of the webcast was depressingly familiar for anyone who has been paying attention to something other than wine scores and premiumization for the past decade:

• Retail wine sales, measured by volume, have declined to where they were in spring 2015.

• The amount of bulk wine on the market is at record levels, which is a key gauge of wine industry health. More bulk wine means less demand, which means lower wine prices, which means wineries make less money.

Will the wine business take its head out of the sand and act on the report? McMillan isn’t necessarily optimistic. I talked to him this week, and he said that there is still tremendous denial among producers, save for the very biggest. Big Wine, he says, “is looking for ways to change the industry,” but it’s about the only ones. 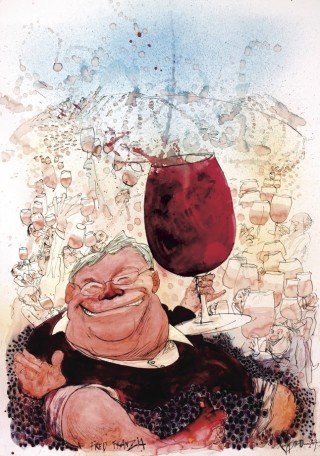 Fred Franzia, the man the California wine business loves to hate, reminded us why last week when he spoke to the wine industry’s most important trade show. “One billion bottles of Two-buck Chuck,” he said to the audience, and I can imagine almost all of those in attendance cringing. Because the last thing the 21st century California wine business wants to be known for is very ordinary $3 wine sold at Trader Joe’s.

Still, Franzia is one reason why California is the most successful wine region in the world. His successes, whether becoming one of the first to sell competently made cheap wine like Two-buck Chuck or pioneering the Big Wine model that is the blueprint for the industry’s domination today, are indisputable. But his speech also revealed why so many in California wine who aren’t Gallo and Constellation aren’t prepared for the rest of the 21st century.

That’s because it was written through the lens of his family’s three generations of success, which was built on better winemaking technology, an unparalleled knowledge of the supply chain, and a canny insight into the Baby Boomers who transformed the way Americans drink wine. Franzia’s Bronco Wine is an example of 20th century manufacturing at its finest — give the consumer a quality product at a fair price, and make sure the retailers who sell your product make lots of money, too.

Those days are long gone. Does Apple really care about its retailers? Does Whole Foods really care about the manufacturers who supply its stores? And does Amazon really care about anyone other than Amazon? Know, too, that Amazon became the largest retailer in the U.S. and it got there without selling a drop of wine.

Yet Franzia spoke about the wine business as if none of that mattered. His talk was firmly rooted in what has been, and not what will be. He was particularly critical of the recent Silicon Valley Bank report that spoke of serious challenges facing the wine business as the Boomers age and consumption declines, dismissing the report as irrelevant because it didn’t accept the truths that he has seen over the past 50 years.

He also quoted Mel Dick of Southern Wine & Spirits, the largest distributor in the world, who has said famously that if U.S. per capita consumption was as big as the French, we’d drink 1.6 billion cases of wine a year — five times what we drink now. The catch? Besides the French wine culture, they don’t have distributors, and buying wine there is as easy as buying a baguette. Which, of course, is not the case in the U.S. That Franzia doesn’t realize that the three-tier system damps down wine consumption and is increasingly irrelevant in the 21st century is not surprising, because he still sees distributors as crucial to wine’s success as perhaps they once were.

One of my regrets in some 20 years of wine writing is that I’ve never interviewed Franzia; the couple of times an interview seemed possible, something fell through. That’s because I admire and respect what he has done, and if nothing else for his constant harping about too-high restaurant wine process. And his success with Two-buck Chuck revolutionized the wine business, something for which many of his colleagues will never forgive him.

But past success is no guarantee of what will happen in the future, and it’s not change that matters as much as how one adapts to change. And change is coming to wine, whether anyone wants to believe it or not — even if you’re Fred Franzia.