“Which one of you is going to write the sponsored post for the .. cough.. cough.. escort agency?”

Where else would one have to fend off payola, college term paper scammers, and whores?

Running an internationally known wine blog may not bring much in the way of fortune, but it does demonstrate the perils of fame – even the limited sort of fame that comes with writing about cheap wine.

In the past couple of weeks, I’ve been barraged (well, sort of) with requests to “partner with” a variety of not inexpensive products. This happens because the blog’s demographics, despite its subject matter, are mostly as upscale as the wine blogs and websites that don’t write about cheap wine. Plus, my visitors seem to be a little younger than the other sites, and we all know how desperate the wine business is to get younger.

• A company that makes wine refrigerators wanted to give me one of their products. The catch? I had to write nice things about the $700 unit and include various links to make sure Google got the hint. I thought this might work as a giveaway for Birthday Week next month – the company would get its blog post, one of the blog’s readers would get the fridge, and I wouldn’t have to worry about ethics. Not surprisingly, the company wasn’t interested.

• A bunch of spammers wanted the blog’s readers to buy college term papers, essays, and assignments written by someone other than the students – what the New York Times has called “Cheating, Inc.” I assume, given the recent college pay to play scandals, that the spammers figured the blog’s demographics translated into parents and grandparents willing to shell out the hundreds of dollars these papers cost. Ah, plagiarism as a growth industry. …

• My favorite pitch? For whores. Who knew I spent all those years honing my craft so a “content development specialist” at a “California-based premium escort agency that caters to all your needs” could ask to write a guest post? I even had topics to choose from, including “10 Reasons Business Men Hire Escorts.” Why do I think I know the reasons, that there aren’t 10, and that we don’t need to run a guest post to figure that out? 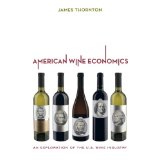 In other words, why most of us don’t learn more about wine — because it’s too much trouble, even if doing so would help us buy better wine for less money.

That’s one of the key points in an intriguing new book by an Eastern Michigan economist, James Thornton, called “American Wine Economics: An Exploration of the U.S. Wine Industry.” The book looks at the economic side of the wine business — something that’s rarely seen given the Winestream Media’s emphasis on toasty and oaky.

“I didn’t really see any systematic examination of wine the way an economist would do it,” says Thornton, who started his academic career studying the economics of medical care. “So, as I was becoming interested in wine, it became a fascinating field of study.”

Hence opportunity cost. Everyone understands the money cost of a good or service, but economists argue that’s not the only cost that determines whether we buy something. There is also opportunity cost — how much it costs us in time, aggravation, and the like, to make a purchase.

In wine, that means not just what we pay for a bottle, but also how much time we want to invest so we can learn more and make better decisions about what we buy. It’s something that happens all the time in other areas, like buying a car. Almost everyone does some research, whether it’s clicking an Internet link or asking a friend about a certain model or a local dealership. And everyone test drives cars, which is about as aggravating and time consuming an experience as possible.

In this, it’s part of what Thornton describes as the theory of rational consumer behavior, which says we want to make the best possible decision. Except when it comes to wine.

“I’d have to speculate here, because I don’t know that there are any studies on this,” says Thornton, a beer drinker who married a wine drinker and came over from the dark side. “But it’s sort of intimidating. You hear all that garbage growing up, that it’s a mortal sin to drink sweet wine, or that you can only have certain wines with friends. And you don’t want to learn, because it is so intimidating. So everyone believes you have to be either an idiot or Robert Parker.”

In other words, academic support for something the Wine Curmudgeon has argued for as long as I have been arguing: The wine business, given the constitutionally protected three-tier distribution system and aided by its allies in the Winestream Media, has no incentive to lower the opportunity cost for wine. The money comes in anyway. Hence wine labels that don’t inform, wine education that is almost non-existent, winespeak, and even scores. And it’s why people buy crappy cheap wine and don’t care, because the opportunity cost is probably higher than the money cost.

The good news, says Thornton, is that the Internet is reducing the opportunity cost of wine. It’s easier than ever to find reviews, ratings, and information about wine, and especially from a crowd-sourced site like CellarTracker. Over time, that should make it easier for consumers to pay opportunity costs, and should help all of us drink better wine.