Wine marketing guru Paul Tincknell says wine marketing lacks imagination and doesn’t focus on why people drink wine. Which is why we get foolishness like Yellow Tail’s Roo

Paul Tincknell, a partner in the Sonoma marketing consultancy of Tincknell & Tincknell, has watched wine market itself every which way but well in his two-plus decades in the business.

The problem, he says, is simple: People drink wine with dinner, but when’s the last time you saw wine sell itself that way? Instead, we get stupid humor or faux sophistication, none of which appeals to the younger consumers who see wine as something that their parents and grandparents drink.

We talked about why this is and how to solve it, as well as how to to market wine in the face of the neo-Prohibitionists. Click here to download or stream the podcast, which is about 10 minutes long and takes up 3.6 megabytes. The sound quality is almost excellent, despite several problems during the recording (and my inability to remember that the Mexican beer we talk about is Corona).

More about wine marketing:
• Wine business: Watch this beer spot to see how TV wine ads should be done
• Hendrick’s gin: How to do a TV booze commercial
• TV wine ads: Almost 40 years of awful

No, Yellow Tail, I don’t wanna pet your roo

Or, as, one observer noted: “Was Yellow Tail just looking for a tax writeoff?”

I was afraid this would happen, as I noted in last week’s wine and Super Bowl post: “But I don’t have high hopes. The company’s last TV ad was – to put it politely – a dud. …”

And, by all accounts, so was this one, combining jock-itch humor, pitiful Australian stereotypes, and even, and I can’t believe I’m writing this, a hint of bestiality – “Wanna pet my roo?” That the guy in the Yellow Suit was the best part of the commercial, even better than the super model in the bikini, should give you an idea of the mess here. We are talking chalk on blackboard, over and over and over.

My guess is that someone told Yellow Tail that the ad should be aimed at Millennial craft beer drinkers, which meant it needed to be edgy, border on tastelessness, and do whatever else it is older creative types think young men and women want. And Yellow Tail, being an Australian company, had to trust the U.S. creative types that it was paying.

Which brings us to the Wine Curmudgeon’s golden rule of business, something that I wish more big companies thought about before they did something dumb: If you’re going to spend a lot of money on something stupid, give me 20 percent of the money you’re going to spend instead of doing it. That way, you’ll still have 80 percent, I’ll be able to retire to Burgundy, and no one will be able to write a blog post giggling at your foibles. 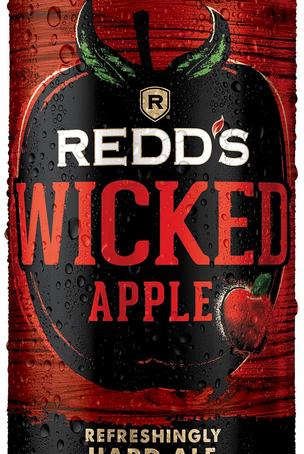 Far be it for the Wine Curmudgeon to criticize a multi-national company and a marketing campaign devised by people who are brilliant enough to work for it, when I’m just a guy at a keyboard who writes about cheap wine. But a recent Redd’s Wicked Apple commercial reminded me how creatively bankrupt so much of post-modern media is: “Let’s sell our product by making fun of wine!”

Original, isn’t it? And the commercial, like most wine humor, isn’t funny. It also borders on homophobic, implying that wine drinkers are somehow not complete men, and it uses African-Americans as a foil to show how cool Redd’s Wicked is. This approach, if I’m not mistaken, went out with “Super Fly” and the original “Shaft.” Unless, of course, you’re selling malt liquor to black people, which is what Redd’s Wicked is doing.


Not surprisingly, Redd’s is a product of Big Beer, desperate to find a way to stay relevant in the 21st century as its audience goes elsewhere. It’s hard to believe that the company that gave us the classic “Tastes great, less filling” commercials is reduced to this.

Ken Ross, at The Republican newspaper in Springfield, Mass., has a fine critical eye for TV wine commercials:

In commercial after commercial, for years and years, television ads created an elitist aura around wine that simply won’t go away. You need to live in a castle or wear a cravat to drink wine. You need to enunciate your words slowly and listen to Beethoven. You need to drive a Rolls Royce or have long, flowing blond hair that moves in slow motion.

Which is something that has been noted here several times. Wine ads on TV are decidedly unoriginal, especially when compared to commercials for beer and spirits. The orginal Miller Lite ads were groundbreaking, and even the recent Captain Morgan rum ads are interesting, if a tad silly.

But not wine. As Ross writes, “Watch a few wine commercials and you’ll start to notice a striking similarity from one bland ad to the next, especially during the ’70s and ’80s.” The reason? The wine business has spent the past 40 years using intimidation to market its product, bludgeoning us with Ross’ cravats. Wine isn’t fun like beer or rum, and you’d better not buy it for that reason. Or we’ll make fun of you.

Ross thinks the situation has improved, and links to 11 ads that he says demonstrate the change. One of them, for a brand that apparently isn’t made any more, is a nifty take-off on the old Grey Poupon mustard ad, and another, for an English wine retailer, captures exactly how terrified most consumers are when they browse a wine shop.

But that those two aren’t strictly wine commercials, and that four others on the list aren’t either, speaks to how pitiful most wine commercials remain. One reason for that, I think, is that the best wine marketers, companies like E&J Gallo and The Wine Group, which makes Cupcake, don’t do TV ads. If they did, they might reach Miller Lite heights (and a YouTube video for Gallo’s Barefoot line, promoting its non-profit Soles program, hints at that).

Or, with a little luck, they could scale the summit of the greatest wine commercial of all, Orson Welles for Paul Masson in the 1970s (courtesy of DarianGlover on YouTube):