• Best regions: One reason why the Wine Curmudgeon doesn’t care much for top 10 lists is that you don’t know who is behind them. As in: Why is the Accor hotel chain proclaiming the U.S. the best wine region in the world? What does that have to with inn keeping? But there it is – the U.S., followed by France, Italy, and New Zealand. The methodology is spotty (scores from a crowd site), which devalues the results — as if there could be legitimate results for something like this. And it still doesn’t answer why Accor felt the need to do this.

• Best books: The two best wine books, in terms of understanding wine and figuring out who wine works, are porbably Kevin Zraly’s Windows on the World and Wine for Dummies, by Ed McCarthy and Mary Ewing Milligan. So how do they fare in a ranking by something called BookAuthority? Ninth and 27th. And how authoritative is BookAuthority? ” BookAuthority identifies and rates the best books in the world, based on public mentions, recommendations, ratings and sentiment.” Taking quality into account would have have been nice, but one can’t expect much these days.

• Bring out the c-notes: If you have $100, then a Dallas restaurant will sell you a glass of a Robert Parker 100-point wine, the 2012 Verite La Joie Bordeaux Blend. Veritie is a Sonoma producer; the current version of the La Joie costs $400 a bottle. Still, I’ll pass, even though the restaurant is throwing in a couple of Riedel glasses. For those of you who are intrigued, the 2012 “is an incredible glass of wine featuring exuberant notes of red currant, black plum and cherry framed by subtle French oak nuances like powdered cocoa and cedar with a balanced finish.” 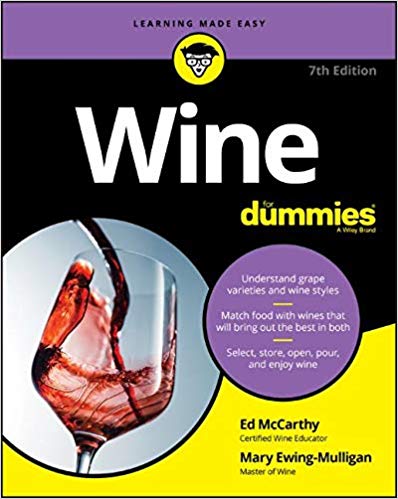 Win a copy of the seventh edition of the classic, “Wine for Dummies” 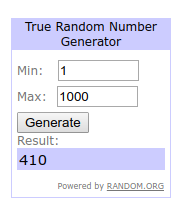 The winner is Marty, who picked 469. The winning number was 410 (screen shot to the left).

Today, to mark the 12th annual $10 Wine Hall of Fame, we’re giving away a copy of the new and updated “Wine for Dummies,” written by Mary Ewing Mulligan and Ed McCarthy.  This has been one of the best wine books since its first publication in 2009. I’m happy to say I know the authors, both top quality wine people.

If you get the blog via email or RSS, you need to go to this exact post on the website to enter (click the link to get there). At about 5 p.m. central today, I’ll go to random.org and generate the winning number. The person whose entry is closest to that number gets the book.