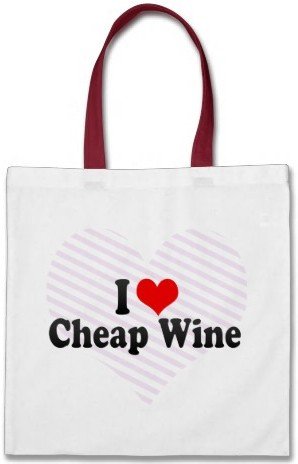 The good news is that the five $3 wines that I drank with dinner last week were mostly OK, and the horror stories that I heard proved to be — for me, anyway — unfounded.

Which is also the bad news. Most wine, even $10 wine, is going to taste reasonably consistent from vintage to vintage. Yes, these wines were OK — and a couple were more than that — but that’s no guarantee they’ll taste that way again if I do this again next year. And, unfortunately, none of them made me jump in the air and fall back down with excitement, ready to re-do the $10 Hall of Fame. Dull is probably a better adjective.

More details on the challenge, as well as my analysis and a few suggestions for the retailers who sell these wines:

First, the challenge. Each night last week, I drank a $3 wine with dinner to attempt to answer the question: Can a wine drinker live on really cheap wine? I tasted five chardonnays sold at leading retailers in the United States:

• Two-buck Chuck ($2.99), the Trader Joe ?s private label. This was the weirdest tasting of the five, with lots of tropical fruit (banana even) and very little chardonnay character. It wasn ?t bad, in the sense I had to pour it down the drain, but it wasn’t enjoyable, either. My guess is that there was a lot of very ripe fruit in this.

• Three Wishes ($2.99), the Whole Foods private label. I expected most of the wines to be burdened with badly done oak (chips, probably). In fact, three of them didn’t taste of oak at all, and the oak in the Three Wishes was quite well done, assuming you like that style of wine. I don’t, so it wasn’t my favorite.

• Winking Owl ($2.89) from Aldi (but may be available elsewhere). My favorite — a straight-forward, 1990s-style jug chardonnay with apple and pear fruit and varietal character for those who remember Glen Ellen. It’s not as well done as something like Bogle, but it does the job for $3 and I would it buy again.

• Oak Leaf ($2.97), the Walmart private label. This was the sweet one, probably a couple of percentage points over the line that separates sweet from dry. Again, not awful, but nothing I would want to drink again.

• Cul-de-Sac ($2.96), a private label for Texas’ H-E-B, one of the largest grocers the country. This was sort of sweet, in the way Kendall-Jackson was in the 1990s (stuck fermentation?), but also tasted like chardonnay.

Worth noting: I didn’t list alcohol levels for the wines, most of which were around 13 percent, since several of the labels seemed inaccurate. The Winking Owl, for instance, was listed as 11.5% and sweet (the back label had a sweetness chart), but it wasn’t sweet. Not even Aldi is sure, apparently: the wine on its website is not the current vintage. The Oak Leaf, which was most definitely sweet, had one of the highest alcohol percentages, so it probably wasn’t accurate either.

Incredibly frustrating: None of the wines had a screwcap. Why did these need a cork, even an artificial one? A quality corkscrew is going to cost more than the wine, and I defy anyone who markets these brands to tell me that they need a cork to preserve some sort of romantic wine image. It’s just $3 wine.

In the end, the quality of the wines didn’t bother me as much as how boring they were, and this quickly turned into a school assignment and not wine drinking. By the fourth night, I was not looking forward to tasting another wine, something that almost never happens.

In addition, most of the wines did not taste like they did the last time I drank them. I had the Cul-de-Sac about a year ago, and had to pour it down the drain — bitter and unripe. The Two-buck Chuck, two years ago in Santa Fe, was much more chardonnay like than this version. This, more than actual quality, is the biggest problem with $3 wine — the consumer doesn’t know what they’re getting from bottle to bottle, and buying wine should not be like playing roulette.

Hence this suggestion: Why make varietal wines? Why not make the best $3 wine possible, using whatever grapes are available, be it French colombard or a blend? This would require a change in marketing, given that consumers have been trained to buy the best known varietal wines like chardonnay and merlot, but it would almost certainly produce more consistent and better quality wine.

Which should be the goal, shouldn’t it?