But we’re still stuck with the 25 percent wine tariff, and perhaps for at least another six months

The Trump Administration said Friday it would not raise its European wine tariffs to 100 percent, which would have included most of the region’s wine. That’s the good news.

The bad news? We’re stuck with the 25 percent tariff imposed last fall until the next review, set for August.

Still, this is much more than a half empty glass. The decision seemed to reflect the wine industry’s tremendous and almost unprecedented lobbying effort against the 100 percent tariff, in which representatives from each of the three tiers testified at U.S. Trade Representative Office hearings, blitzed the old and new media, and organized public anti-tariff campaigns. In this, groups that typically disagree as often as they agree worked together for the greater good.

For example, the Wine Institute, the trade group for California producers, has been working for years to change state laws to make it easier for consumers to buy directly from wineries. This has been opposed by most of the second tier, since wholesalers have a monopoly on selling to retail and restaurants under the three-tier system and don’t want to allow any exceptions. But the two groups were side by side in opposing the tariff.

“It was one of the rare cases in the industry when everyone’s interests aligned,” says Cindy Frank, a long-time wine industry executive who has worked as an importer, wholesaler, producer, and retailer and who testified at last month hearings before the U.S. Trade Representative in opposition to the tariffs. “It’s the one issue that has worked itself all the way through the three-tier system.”

So where does this leave us?

• The tariff decision was announced on Friday afternoon. This timing, after everyone leaves for the weekend, almost always means the people announcing the news didn’t want to talk about it. Which often means they did something they didn’t want to do, and so didn’t want to have to explain their decision. Still, that aircraft tariffs were increased, when the initial dispute was about aircraft, speaks volumes. The World Trade Organization ruled in October that EU subsidies to Airbus were illegal, and that the U.S could impose tariffs in retaliation.

• Credit some of the decision to our friend, the three-tier system. Apparently, Trump Administration officials didn’t understand what three-tier was or how it worked. Their questions, said several people who testified, assumed retailers, importers, and wholesalers could easily replace European wine with imports from other parts of the world, just as they would steel or soybeans. The officials didn’t know how severely three-tier restricts how wine can be sold in the U.S.

• Economic turmoil. The wine industry lobbyists, as part of their effort, did an excellent job in showing that higher prices for imported wine would lead to job losses, bankruptcies, and lost sales up and down the U.S. supply chain, whether big or small retailers, producers, importers or distributors, says Southern Glazer’s Barkley Stuart, the chairman of the Wine & Spirits Wholesaler Association’s board of directors.

• The tariff was re-examined four months after it was applied as required by U.S. law. This was a point of confusion after the October ruling, and I reported the process incorrectly in the “Does anyone have any idea what’s going on?” post (and since updated). The next tariff review, as required by law, must come by August. In addition, the WTO is expected to announce later this year that the U.S. gave Boeing illegal subsidies in retaliation for the EU subsidies to Airbus. If that happens, then there’s political cover for both sides to negotiate away the tariffs, but no one knows if or when that will happen.

• Retailers, pricing, and rose season. As reported here and elsewhere, retailers, distributors, and importers have worked together since October to minimize the 25 percent tariff’s effect on prices. But, as one Dallas retailer told me, all bets are off on holding the line on prices when rose season arrives in the next month or so. 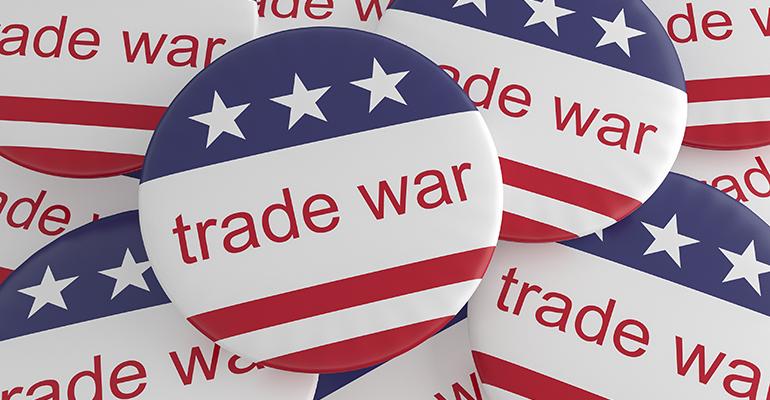 But still no word on whether the U.S. will delay imposing a 100 percent tariff on all European wine

U.S. officials say they will hold off on escalating a trade war and won’t impose a 100 percent tariff on French wine and Champagne, cheese and handbags. President Donald Trump had threatened the new duties to retaliate for a French tax on U.S. tech firms, including Facebook and Google.

The tech giants, despite ample evidence that the tariff would hurt U.S. companies, opted to protect their billions of dollars in profit at the expense of U.S. jobs, and supported the president’s decision. Their backing was seen as the final impetus in imposing the 100 percent duty.

The good news: The Financial Times reported yesterday that a French finance ministry official said the two sides had agreed to a “ceasefire” until the end of the year. He told the newspaper that no tariffs would come into force before then and talks would continue on digital taxation.

The bad news: CNN emphasized that there was no official word from the White House that it would delay the tariff. This approach has not been unusual in Trump’s on-going tariff broadsides with other countries over the past three years, and it wouldn’t be surprising if the U.S. changed its mind and the tariff went into place.

In addition, it’s unclear whether this compromise will delay the the proposed 100 percent tax on all European wine, part of the on-going trade dispute about unfair subsidies to European aircraft producer Airbus.