The Justin Isosceles is a powerful, well made California red blend

The Wine Curmudgeon has always appreciated Justin’s wines, whether the $12 sauvingon blanc or the pricey, pricey red blends. It’s not necessarily a style I prefer, but the wines are always well made and aren’t as over the top as so many others.

The Justin Isosceles ($70, sample, 15%) is a case in point. On the one hand, this red blend (mostly cabernet sauvignon, with about equal parts merlot and cabernet franc) costs a lot of money, and especially for a wine from California’s Paso Robles region. Plus, that 15 percent alcohol screams “HOT FRUIT BOMB DESIGNED TO GET 96 POINTS!”

On the other hand, it’s not nearly as hot and as ripe as it could have been. Powerful, yes, in that fruit forward, California style. That means lots and lots of black fruit aroma, and it tastes of not too sweet cherry fruit. Plus, there is even a little spice, and the oak pushed just enough to the background so as not to get in the way. If it’s not subtle, it is mostly balanced, very layered, and well worth drinking (assuming the price doesn’t scare you off).

I’m not sure the Justin Isosceles is going to age all that well for that much longer, so it’s ready to drink now. 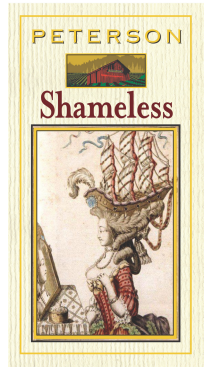 The Petersen Shameless is a terrific California red blend that most of us can’t buy – thank you, three-tier system

Today, on the day before Independence Day, the blog offers a wine of the week that most of us can’t buy, the Peterson Shameless. That’s because the three-tier system’s stranglehold on consumers deprives us of the independence to buy the wines we want, like the Shameless. Instead, we’re forced to buy the wines the second tier – the wholesalers – decide we can buy.

The Peterson Shameless ($15, sample, 14.2%) is a non-vintage red blend from California. It’s a field blend, where the grapes change with each bottling depending on what’s available and what fits the winemaker’s mood. In the fifth edition, that means nine grapes, though about one-half are barbera. The result is ripe red fruit (cherry and a sort of tart berry thing) that leads to a rich, almost soft mouth feel and wonderfully creamy tannins. It’s a terroir driven wine, something that is difficult to find at this price in California, and quite enjoyable (and especially for people who like this style).

And, unfortunately, difficult to buy even though it screams July 4 barbecues. That’s because Peterson is a small winery and doesn’t make enough of the Shameless to interest one of the mega-distributors that dominate the market. Hence, no clout to get on store shelves and probably not available outside of parts of California. Yes, you can buy it from the winery, but only if your state allows direct shipping – and most still don’t.

Call this post the Wine Curmudgeon’s contribution to the on-going debate about the the three-tier system. Yes, progress was made last week, but we still have a long way to go – as the Peterson Shameless demonstrates.