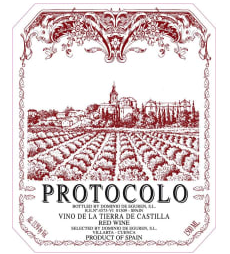 The Spanish wine regions around Madrid aren’t famous, unless someone is sneering about the tanker cars of cheap red wine produced there every year. Let them sneer, because they’re missing out on terrific cheap wine like the Protocolo.

In fact, one reason why Spanish tempranillo is among the best red wine values in the world is that regions like Castilla-La Mancha do more than make tanker cars of cheap red wine. Much of it is cheap wine the way it should be – varietally correct and following the style of the country, simple but not insulting. And, since producers in these regions can do cheap so well, it holds down the price of better quality tempranillos from Rioja and Ribera.

The Protocolo ($9, purchased, 13.5%) is everything one hopes for in a cheap Spanish tempranillo — soft tannins, just enough acidity to show that it’s red wine, and ripe but not too ripe berry fruit. Plus, it has flavors at the beginning, the middle and the end (a sort of rustic earthiness), just like more expensive wines.

Highly recommended, and a candidate for both the 2020 Hall of Fame and the Cheap Wine of the Year. Drink this with almost any spring and summer barbecue, and then keep drinking it the rest of the year.

Imported by Fine Estates from Spain

The Spanish have been making vin ordinaire for what seems like forever, but given that Spanish wine has traditionally been overlooked in the U.S., the only cheap Spanish table wine that most of us know is Sangre de Toro.

Which is too bad, since the company behind Protocolo does a more than decent job as well. The red was a little boring — mostly fruit that had been too heavily handled, though not nearly as overdone as some. The Blanco ($7, sample, 12 1/2 percent alcohol), on the other hand, was a nice little surprise in the midst of holiday wine tasting. It's made with two Spanish grapes — air n and macabeo, which is also used to make cava. The Blanco had a little lemon fruit, some earthiness and even a bit of minerality, though not as much acid as I expected. This was probably because it was a previous vintage; even so, it held up well.

Chill this and keep a bottle handy for wine with dinner (chicken comes to mind, though takeout that's not too spicy would work, too). It's mostly a warm weather wine, but I'm not going to pass up a chance to drink good cheap wine just because it's cooler in December.