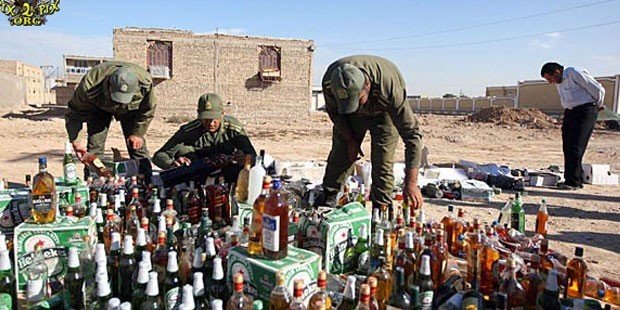 Banning booze has failed in Iran, where you can be whipped for drinking. So why does anyone in the U.S. still think it’s a good idea?

The neo-Prohibitionists, arguing for stiffer laws and higher taxes to stop us from drinking, need to widen their world view. If Prohibition hasn’t worked in Iran, where drinking is punished with floggings and even death, why does anyone think it will work in countries with less repressive governments?

Because, as the New York Times reported (in one of those stories that reminds us how good the best reporting can be), the Iranians realize that almost 40 years of Prohibition has failed. By some estimates, “drinking [among the urban middle class] has become as normal as it is in the West. The Iranian news media have reported that those Iranians who do drink tend to do so more heavily than people even in heavy-drinking countries like Russia and Germany.” In addition, “alcohol is relatively easy to procure. There are alcohol suppliers anyone can call, and they will deliver whatever you want to your doorstep. Dealers receive their goods through a vast illegal distribution network that serves millions with alcohol brought in from neighboring Iraq.”

In other words, Prohibition in Iran ran into the same obstacles that it did in the U.S. – bootlegging and corruption on the supply side, and increased demand that led to excessive drinking and even abuse. Drunkenness has become so widespread, in fact, that the government now permits Alcoholics Anonymous chapters – a stunning reversal of policy in a country where officials always insisted no booze meant no alcoholism.

Said one AA group leader: “These days there is so much alcohol available, simply punishing everybody and using force is no longer working. Drinking and bootlegging used to be viewed as equal crimes, and people would be lashed for being abusers. Now, security officials, the municipality, they all view alcoholics not as criminals, but as patients who need treatment.”

In other words, the key to reducing alcohol abuse is education, not tougher laws like Utah’s two-drink limit. What puzzles me about the neo-Prohibitionist trend in the U.S. is that we’ve seen education work – fewer drunk driving deaths and less underage drinking, and especially over the past 20 years. Yet that hasn’t seemed to make an impression with the Neos.

Hopefully, it will. Otherwise, they’re going to waste time and money on something that they can’t fix. If the Iranians can figure this out, why can’t we?

Images courtesy of the BBC, using a Creative Commons license

The Wine Curmudgeon, as a general rule, eats lunch at home — a sandwich with a couple of glasses of water while hoping the phone doesn ?t ring. It ain ?t glamorous, but it is effective.

About a dozen times a year, though, I get to have wine with lunch. It’s usually a meal with a visiting winemaker, but it could also be a media trip or just because — either I’m taking the day off or someone suggests it. And, in those dozen times a year, I’m reminded that sometimes, effective isn’t enough.

Wine with lunch is not what it used to be. Even the French, who turned it into an art form, have pretty much given up on it. Writes Simon Kuper: “France is still not like bits of the U.S., where anyone ordering a lunchtime glass is apparently assumed to have a drinking problem, but it is getting there.”

There are good reasons for this, the most obvious being that no one wants to go back to work too sloshed to get anything done. But isn’t there a midway point between being too sloshed and Kuper’s right-on description of U.S. attitudes? (Which I know first-hand, since I live in one of those places — I get the stares when I order wine with dinner.)

I was reminded of this last week, when I had winemaker lunches with J and Rodney Strong. Somehow, we managed to taste wine, eat lunch, and have intelligent discussions about the wines, the wine business, and even bread baking without anyone staggering out of the restaurant like Foster Brooks. I was even able to drive home and work both days. The wine was not a hindrance, but fun. I don’t know that I want to do it every day, but I do know that I want to do it more often.

In this, wine with lunch does not mean wine instead of lunch. I wonder if our attitude towards this sort of thing has been shaped by what Lew Perdue of Wine Industry Insight describes as the neo-Prohibitionist assault on wine and drinking. Regular visitors here know that I don’t write about the foolishness that is wine health news and that I long ago accepted that 40 percent of Americans say they don’t drink. That’s their business, and who am I to tell them they’re wrong?

But are we at a point where they’re telling the 60 percent what’s good for us? It’s a question I ask with hesitation, because it seems difficult to believe here in the 21st century, 90 years after the end of Prohibition. But if someone like me, who loves wine and writes about wine and drinks wine daily — and is responsible when I drink it — is reluctant to drink wine more often, how must less experienced wine drinkers feel?

Perhaps it’s something to discuss the next time I have wine with lunch.